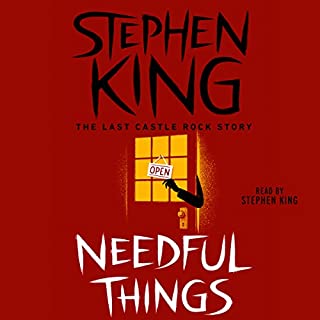 Leland Gaunt opens a new shop in Castle Rock called Needful Things. Anyone who enters his store finds the object of his or her lifelong dreams and desires: a prized baseball card, a healing amulet. In addition to a token payment, Gaunt requests that each person perform a little "deed", usually a seemingly innocent prank played on someone else from town. These practical jokes cascade out of control, and soon the entire town is doing battle with itself. Only Sheriff Alan Pangborn suspects that Gaunt is behind the population's increasingly violent behavior.

The narration by King himself was fun, I've always enjoyed listening to him read. But in the grand repertoire of his novels, this was fairly middle of the pack for me. I'll remember Leland Gaunt perhaps, but the other characters not so much. The novel was a bit verbose, but I know that's not a new criticism for this novel.