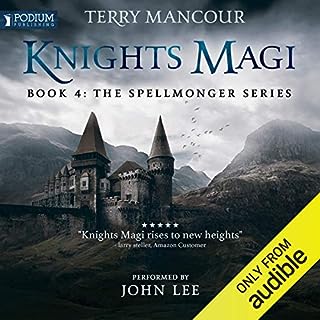 When the Magelord Minalan, the Spellmonger's two apprentices, Tyndal and Rondal, were knighted after the battle of Timberwatch, they were dubbed Knights Magi: a new class of nobility for distinguished High Magi. Designed to combine the pursuit of arcane knowledge with the noble aspirations of chivalry, it elevated them above common warmage...in theory. The problem was they had no idea how to be a Knight Mage...because no one had ever been one before.

This book primarily focuses on the two apprentices instead of Minilan himself. The book does a pretty good job of holding interest but there are some pretty major lulls. I would recommend this if you really enjoyed the others thus far.
#Audible1