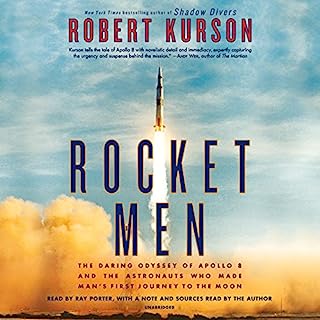 By August 1968, the American space program was in danger of failing in its two most important objectives: to land a man on the moon by President Kennedy's end-of-decade deadline and to triumph over the Soviets in space. With its back against the wall, NASA made an almost unimaginable leap: It would scrap its usual methodical approach and risk everything on a sudden launch, sending the first men in history to the moon - in just four months.

A launchpad of history

This novel was a great listen. Ray Porter gave an excellent performance.
His excitement paired with Robert Kurson’s writing took this listen to new heights. Typically I am an fiction fan, but this novel piqued my interest. Being a fan of history and a interest in space, this was a terrific way to put these two interests together.
Highlighting the importance of Apollo 10, and how often it is looked over as an achievement of humanity. I would recommend this novel to almost everyone. #Audible1