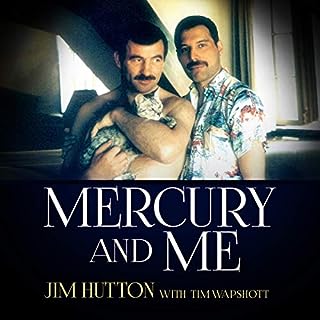 The relationship between Freddie Mercury and Jim Hutton evolved over several months in 1984 and 1985. Even when they first slept together, Hutton had no idea who Mercury was, and, when the star told him his name, it meant nothing to him. Hutton worked as a barber at the Savoy Hotel and retained his job and his lodgings in Sutton, Surrey, for two years after moving in with Mercury. He was never fully assimilated into Mercury's jet-setting lifestyle, but, from 1985 until Mercury's death in 1991, he was closer to him than anyone and knew all Mercury's closest friends.

A thoughtful, beautifully told story of the private life shared between Freddie Mercury and his husband, Jim Hutton. The story is told very respectfully and full of lovely details of their cats, up to the heartbreaking final days of Freddie's life. A must-listen for any Queen fan. The narrator is spot on with his voices and does a wonderful job. Highly, highly recommended; I will definitely re-listen to this many times.