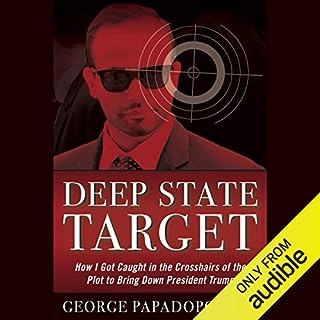 Deep State Target is the only firsthand account that proves the attempted sabotage of Donald Trump’s presidential campaign by American and international intelligence services, from former Trump advisor George Papadopoulos - whose global network, clandestine meetings about Hillary Clinton’s hacked emails, and rift with former Attorney General Jeff Sessions made him the first target of Spygate, the Mueller Investigation, and the Russian Collusion Hoax.

Perhaps it's just the benefit of experience and more up to date information, but I found Mr Papadopoulos to be rather naive. It was obvious from the start he was being set up but perhaps ambition and youth blinded him to the fact.

Also, he's a little too obsessed with himself and his interests, and apparently not aware of the wider aspects of his case. Though that could just be that we now have far more information about the "Steele dossier" and FBI maladministration.

What is glaringly obvious is that Papadopoulos was specifically set up in order to damage the Trump campaign and presidency (he came up with other rather odd conclusions). Also obvious is that the international "deep state" is largely incompetent, but able to act pretty well with impunity so their incompetence is seldom called to account. We can only hope future investigations change things for the better. Though I doubt it.