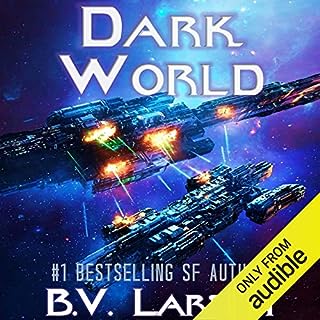 Two expanding interstellar powers are about to meet in battle. After the collapse of the Cephalopod Kingdom, Humanity claimed the 300 rebellious worlds it left behind. But light years away on the far side of a disputed region, a rival power has begun to move. They're stealing our planets, one at a time. Earth Command decides to invade the center of the frontier to set up an advanced base. The mission to DARK WORLD is highly classified and deadly. Legion Varus spearheads the effort, and James McGill journeys to the stars again. How many ships do they have? How advanced is their tech?

One of the best series! I have listened to all the books and you really do fall in love with the characters. I would highly recommend to anyone that likes an action based novel. The main character is fun and dynamic and you never know what to expect #audible1