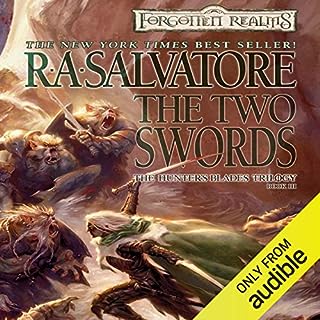 This title is the third and final book in the latest trilogy from R. A. Salvatore, which once again features his popular dark elf character Drizzt Do’Urden™. The original release of this title had the highest debut ever on The New York Times best seller list for a Salvatore title with Wizards of the Coast at number four. The title stayed in the top 20 for five weeks. Both of the previous titles in the series were also New York Times best sellers upon hardcover release, and the first title, The Thousand Orcs, hit the list upon mass-market release as well.

I like some of the ideas and themes, but the trilogy seemed to mirror lord of the rings. Some storylines felt added just to make things fit in the ending. Still enjoyable, especially when narrated by Victor Bevine. He has the ability to make even the fuller points of the book exciting.