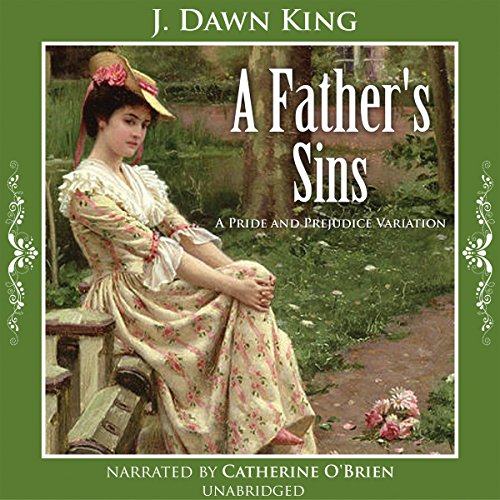 How do Fitzwilliam Darcy and Elizabeth Bennet overcome the consequences of poor decisions made by their fathers when Darcy and Elizabeth were young? In A Father's Sins, Mr. George Darcy, father of an illegitimate child raised by his steward, Mr. Wickham, agreed with his wife, Anne, that the firstborn son of their marriage would be heir to Pemberley. However, Mr. Darcy loved his eldest son, George Wickham, and indulged him by bringing him to Pemberley to live after the death of his wife. His heir, Fitzwilliam Darcy, paid a heavy price for this decision. Mr. Thomas Bennet, an educated gentleman and father of five daughters, favored his second born, Elizabeth. Unexpectedly, his wife gave birth to a son and heir. Mr. Bennet, at the persistent urging of his wife, chose not to have his youngest children vaccinated for smallpox. When the plague hit Longbourn it devastated their family. Elizabeth paid the heaviest price for this decision of her father. What happens when Darcy and Elizabeth meet? Will they be able to overcome the consequences of the choices their fathers made? When George Wickham, Lady Catherine de Bourgh, Mr. William Collins, and the Fitzwilliam family arrive in Meryton, how will that impact their growing attraction? How does the same decision by Mr. Bennet influence the relationship between Jane Bennet and Mr. Bingley? Will love have a chance?

The story is nothing out of the ordinary in this P&P genre, but still good fun. Imagine Elizabeth as a doctor! Or at least an apothecary. Not really a spoiler but be aware Mr Bennet is the villain of the piece, so there are quite a few character licenses to be had.
The story has a lot of great historical background, for the time. and the tone is generally light and fun. a few of the plot twists made me think more of a Charles Dickens impersonation, ala Nicholas Nickleby, than Jane Austen. It pokes fun at the times, the characters occasionally feel like caricatures, and event generally feel either too good or too bad to be true.
Now about the narrator, I'll just say listen to sample. If you don't mind her, great! If you do get as annoyed as I did, be aware that if you listen to this at 1.25 to 1.5 times speed she becomes completely tolerable.

Always like to listen to P&P variations, especially ones that stay true to certain characters I like most. This was a good variation but not one I would purchase. Glad to find it on escape plan <3

loved it, truly enjoyed this book it has such truth to it and also because they did do the items that were taken from true stories but this was a very good book totally a keeper.

Overall I enjoyed this. The story was a bit trite but I thought it was a fun ride overall. I felt like resolutions were reached too easily in some cases making the story a bit 2-dimensional. There are some slight errors regarding the time period (for instance Georgiana went to her fathers funeral), but nothing was off to the point where it detracted from the story. I loved this adventurous and well traveled Elizabeth. Overall worth listening too.

a favorite book by an amazing author

J Dawn King has been one of my favorite authors and this book in particular is at the top of my list of best stories.

be prepared because things have changed. I thought it would bother me but instead I couldn't wait to see what was happening next.

I LOVE this story, and have reread it many times. I finally thought to look for it on Audible, and I wish I hadn’t. The English accent is gratingly bad, and the voices for the characters (particularly Darcy) are a form of punishment.

I enjoyed the story, although it was hard to have Mr. Bennet acting the way he did. Of course, it allowed Lizzy to grow into the accomplished woman of this story. Loved this Darcy, as well as the Gardiners. Definitely a worthwhile listen!

What was up with the Jane? I can not beklive the way she was portrayed in this!

Love the story and the narration was wonderful to listen to. I highly recommend this book. I love Elizabeth's spirit.