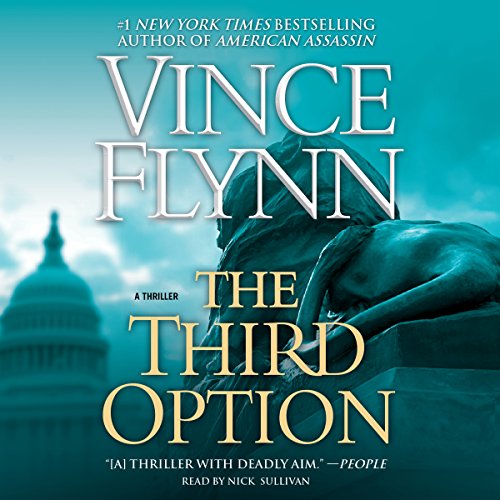 CIA counterterrorism operative Mitch Rapp falls prey to government forces with an agenda of their own after Dr. Irene Kennedy is named the successor to dying CIA Director Thomas Stansfield—a choice that enrages many inside the world’s most powerful intelligence agency. Her detractors will resort to extreme measures to prevent her from taking the reins—which makes Rapp an expendable asset. But Mitch Rapp is no one’s pawn, and he will stop at nothing to find out who has set him up.

"Flynn hits his stride in this thriller about high-end Washington politics...[he] has an exciting, Ludlum-like series going here." ( Booklist)
"Flynn's latest thriller...is an old-school spy story...updated with heavy helpings of international intrigue and domestic politicking and betrayal." ( Library Journal)
"Fans of Ludlum and Clancy will want to check it out.' ( Pioneer Press)

More of a book setting up the future of Mich

It was a bit harder to keep going with this one.

A little too much political talk. Not enough tactical.

This was a good Mitch Rapp Book but it is too short! It ends suddenly!

Vince Flynn makes you feel like you have top level security clearance. Mitch Rapp was going to be used as bait but thanks to some great writing you can really believe how the turn of events can happen and just how deceptive the American Government can really be. It is a story far from finished because the deception runs so deep that you are going to want to read the next book as well.

I'm hooked on this series!

I've listened to some other authors since volume 1, but this series is my favorite.

story was again very good. ending was a total annoyance as it gives very little closure on the book. leaves you with a cliff hanger for the next book. which I will buy.

performance of the audiobook was the worst of the series so far. it's very choppy and has awkward pacing almost as if the recording was done sentence bu sentance. with a extra gap in between them. this is the first audiobook I've had it with though and hasn't turned me off of the series, audible or audiobooks in general.

I've read the entire series before and as always I enjoyed this book. I struggled with the narration. The fake voices were unnecessary and the mispronouncing of extremely common names became grating. That being said I enjoyed the story but I won't listen to another book narrated by Mr. Sullivan.

A great novel nearly ruined by the reader.

Would you listen to The Third Option again? Why?

He sounded like he was narrating a science text book.

I can't get enough of the Mitch Rapp series, and this is no exception. My only complaint is that I could not believe this installment ended when it did. I was convinced that I failed to download a segment. Alas, the narrative was at an end. Fortunately, I have already downloaded Vince Flynn's next book. Great series Mr. Flynn!

Please put a hit out on Anna Rielly

Ok, Mitch Rapp has an attempted hit on him again, so one would think circling the wagons and keeping quiet would be in order, right?
Not if you're Anna, Mitch's girlfriend. Considering he's a top-secret "spook", she sure loves to let people in on the secret. What an idiotic milksop. I was getting ready for her to give out various aliases of Mitch on her live TV broadcast. Better yet, why doesn't she put a marquee out on the White House's front lawn that says,"I'm Mitch Rapp's girlfriend. Please come make me a hostage or just kill me.Oh, by the way, Mitch lives [here]."
Spoiler:
Excluding Mitch's girlfriend, this book was much better than the last one. Losing THE CIA Director was hard. He will be greatly missed
I also enjoyed "The Frog." He was a great wiley character and I hope we see a beautiful Mossad agent again. Hey, we could get lucky. Maybe Mitch will leave Anna for her.

I have really enjoyed Mitch Rapp until this book. The reader was very disappointing and I found Flynn's writing on this one to be absolutely sub-standard, bad grammar, repetitive and predictable.

Very Poor Narrator, but the Story was Decent

I wish the motives of the

Who would you have cast as narrator instead of Nick Sullivan?

Anyone else. He has a really amateurish style and is quite stilted at times.

book was great all the way to the non ending. left a big hole, felt like a jigsaw puzzle with the last piece missing.

First, the pros. The story is good and the character development is what you'd expect from the series. Listening to the book is helpful if you want to follow the Rapp story arc sequentially. Now the cons. The book ends with no resolution, which is very unsatisfying. Had I not read other reviews before listening, I would have been certain that it was a download error.

Nick Sullivan's voice is fine; it's what he does with it that had me wanting to correct him in my head. For example, the character Anna Reilly comes from a family of Chicago cops. Is it at all reasonable to think it would be pronounced "Reelee"? Flynn writes the name Reilly countless times in the book, and every time Sullivan mispronounced it it was like nails across a chalkboard in my skull. I thought it was ridiculous that he kept pronouncing McLean, Virginia as "Macleen," but that only comes up a few times in the book. You'd think the production team would at least get the pronunciation of the main ensemble's names right.

The problem with those type of "unforced errors" is that they take the reader out of the story, dampening the fun of escaping into the author's world.

There must be a part 3 somewhere. It couldn't possibly end at the end of part 2. What gives, Audible?

Started off a bit slow but I couldn't stop listening by the time I hit the chapters in the late-teens. The ending is phenomenal!