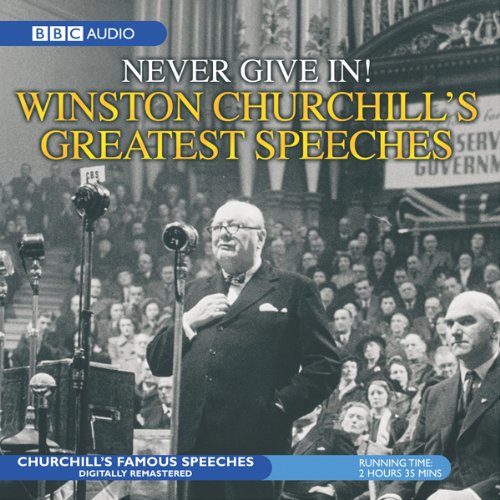 Winston Churchill steered Britain through its darkest hours during World War II. He was one of the 20th century's greatest orators, and the speeches that he painstakingly composed, rehearsed, and delivered inspired courage in an entire nation. Churchill's output was prolific; his complete speeches alone contain over five million words.

On this special recording, the best and most important of those have been brought together in this historic volume. Using digitally remastered archive recordings, they include: "Blood, toil, tears and sweat", "The Few", "This was their finest hour", "We can take it!", "An Iron Curtain has descended", "Never give in!", "A total and unmitigated defeat", and "Give us the tools".

Winston Churchill oversaw some of the most important events the world has ever seen and was the most eloquent and expressive statesman of his age. These speeches help reveal the man behind the defiant orator and demonstrate why, in a national poll, Sir Winston Churchill was voted "Greatest Briton of All Time".

Many thanks for making these speeches available, both the original broadcasts and the few not recorded at the time. I thought the St George and the Dragon speech especially hit the right balance of subtle mockery without overpowering the overall upright and serious tone. Listen for yourself and discover why president JFK and so many others value Sir Winston Churchill so much. A pity we have so few remaining schools and institutions still capable of producing such sense and character society will always and desperately need.

IN HIS OWN VOICE

Those powerful quotes that every WWII history buff has learned to love and cherish are all here in the recording of the actual speech. The context of when and where the speech was delivered is given by his grandson. If you love Churchill you'll love this audio.

Inspiring speeches by Churchill, some in their original audio with very good quality. A background and context of these famous speeches is given so you can appreciate how valuable Churchill's communication a motivational skills were at the time.

Several of Churchill’s great WWII speeches. What’s not to like? Just the right length for an afternoon walk.

Many of his best are here.

Would you listen to Never Give In! again? Why?

What other book might you compare Never Give In! to and why?

A book of FDR's speeches. This one was shorter, but made the same point.

Which character – as performed by Sir Winston Churchill – was your favorite?

Churchill himself being he was the only character to be found.