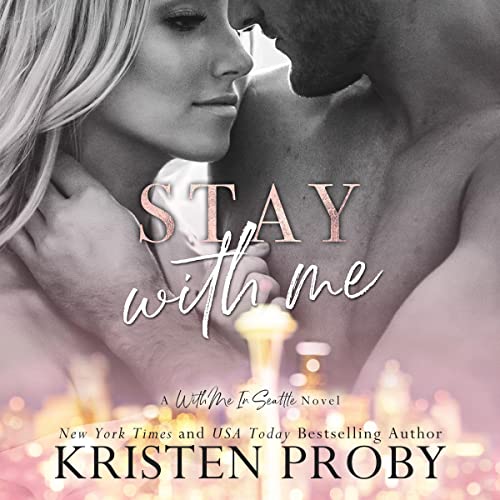 From New York Times best-selling author Kristen Proby comes Stay with Me, an all-new addition to the series that has sold more than a million copies to date, her beloved With Me in Seattle series!

Amelia Montgomery has left her past behind her. With a beauty and fashion career that’s skyrocketing and a loving family around her, everything else is just junk in the rearview mirror.

When she has to drop out of the public eye, her cousin Jules offers her a new, temporary life on the Puget Sound. Her past may be catching up with her, but hope for the future is in Seattle.

Wyatt Crawford can’t figure out the enigmatic beauty who’s living next door. As an architect, he’s usually good at looking beneath the surface - but she barely even leaves her house.

Until she needs his help.

When she knocks on his door, how can he resist? It isn’t long before Wyatt and Amelia become more than just neighbors. But when he finally learns the truth, will the skeletons in her closet be too much for him to handle, or will he stay?

SORRY.. BUT IT JUST WASN'T FOR ME

I usually enjoy a Kristen Proby story.. but sadly not this one.. I usually don't have a problem with insta-everything but, with this story, by chapter three it was game over.. and I don't usually ask for my credit back on one of her books - but I will with this book.

The "says.. said.. replied.. says.. asked.. comments.. says.. mutter.. adds.. says.. etc. etc. etc. drove me mad as it's one of my pet peeves and is unnecessary when you've got decent narrators. There was absolutely no anticipation.. no build-up.. no exciting hold your breath moments that make a good romance. The predictable angst near the end seemed ott for the situation two people who loved each other and had sworn not to jump to conclusions and to be patient because of their past relationship baggage.

Worth a credit? Unfortunately, for me, it's sadly a no this time.. but this may be YOUR next 5 star listen.

The narrator was very different than the previous books. The storyline was also very different but enjoyed a different Outlook of love and life. I couldn't put it down. I'm hoping that there is a continuation with his brothers to intersect with the other members of the Montgomery family

So glad to be back in Seattle-With Me!

I didn’t realize how much I was missing the With Me families until I started listening to this book.
Amelia is a wonderful, intelligent, independent Montgomery woman. Wyatt is her neighbor when she relocates to Seattle.
Both of them have baggage. The chemistry is palpable and you want these two to be together.
Even better you meet Anastasia and Archer Montgomery Amelia’s siblings. We also meet Levi, and Jace Crawford, Wyatt’s siblings. One can only hope this means several more “With Me” books.
Kristen Proby continues write amazing family sagas that don’t disappoint. If you like to read books in series and follow characters Kristen Proby is your author. Many characters cross series and make cameos.
You will not be disappointed with this audible book purchase.

The story is good and Lee Samuels does a great job, I have a really hard time with the female narrator, I almost skipped this book because of it however, I have the entire series and didn't want to miss out..

narration so bad, I wasn't able to enjoy this book

I returned this book because it was so poorly narrated. I enjoyed the first 8 books in the series. This book is read by different narrators. The established character voices were missed. They definitely add to the overall enjoyment of the series. But even ignoring this problem, the narration was awful, very hard to take the characters seriously. I didn't realize how important the right narrator is until listening to this book. I didn't even finish listening.

Another With me in Seattle book! Yay!

Until this book was out, I had no idea how much I missed the others in the series. So good to hear how their lives have moved on and into their families, and sticking together no matter what. The fact that Kristen Proby has managed to keep her characters themselves (man that must be hard!) in each new book as they appear in other books along the way. This one is no exception. You get everyone! The Quarterback, the nurse, the cupcake shop, the cop, even the actor and his photographer! They all band around for Lia (Amelia) in her quest for safety and fight for the sweet, strong Wyatt. Excellent end to this amazing, unforgettable series. I hope it's not the end tho - need more Montgomery madness! :)

When you’re in a relationship listening and talking are good to have but you have shut one to do the other! Glad that Amelia and Wyatt got a second chance!

I ike this book the caracters are great and i love the new man more stories. One thing i really loved was that she didnt make easy for him when he fucked up. Good girl.

Another great book by Kristen Proby. I seen nothing wrong with the narrative of this book. I just turned the speed up.

The With Me in Seattle Books were amazing!!!! I could not wait to read the next book.