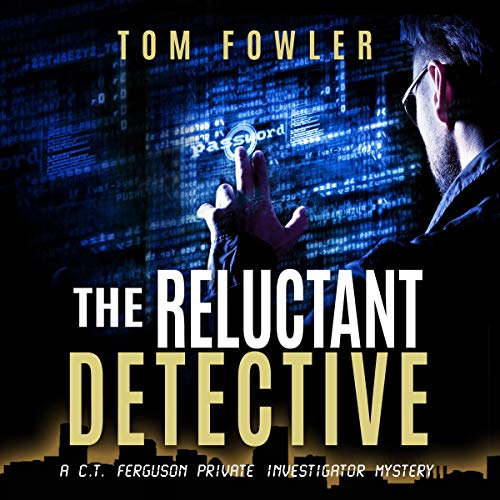 Instead, he gets Alice.

C.T. Ferguson spent years as a hacker. He lived in Hong Kong, working against the Chinese government. Then they found him, threw him in jail, and eventually kicked him out. In Baltimore, C.T. sets himself up as a private investigator.

Then Alice walks in. She’s sure her husband is cheating on her. C.T. looks into it but isn’t convinced.

He soon discovers Alice has serious problems of her own. When her troubles get even worse, C.T. finds his own life in danger. With a liar for a client and enforcers hounding him, can C.T. prevent his first case from becoming his last?

I was reluctant to put it down

Overall I loved this book this book, the audio performance was pretty good. The performer conveyed the characters true to the e-book and provided distinction between the characters’ “voices” so that the listener would never have to wonder who was speaking. If one is reading the book and the audio simultaneously there were some deviations (5 major and less than 30 minor) from the printed book. One major deviation caused two sentences to overlap on the audio, another was a duplication of a phrase and both of these threw me. The other major deviations (consisting of leaving out phrases from the script) and the minor deviations (different or dropped words) did not detract from the overall story and might not be noticed otherwise.

C.T., a grey hat hacker, is forced to get a job helping people if he wishes to get back in his parents’ good graces. As the story progresses he has decided to continue using the skills he acquired in China to help people with little to no means as a private eye, thinking that hacking is the new way to solve their issues, not fully anticipating that his cases may need the physical legwork as well. Tom Fowler’s first full length book brings C.T. into the here and now; showcasing his witty humor, understanding of digital detecting, and the potential dangers PIs might face. His cast of supporting characters are the perfect blend of right and wrong side of the law, allowing C.T.’s own brand of morality to shine. I came into the series at The Unknown Devil and was hooked, finally getting time to re-read the series in preparation of the next release, I realized I had never read The Reluctant Detective and set about remedying that fact, not knowing that I would be reluctant to put it down.

I received a free audio copy of the book from the author for a book I had previously purchased. I had the opportunity to review or not.

This is your traditional detective's story, with an untraditional protagonist. C.T. Ferguson is a hacker, and the son of a privileged family, who come back to Baltimore after being jailed in a Chinese prison for using his hacking skill to agitating the Chinese government. His parents decided that they only will allow him access to his trust fund if he gets a job that helps people. That's how his pro bono detective agency is born.

His first case, an apparently boring adultery case, becomes quickly more interesting when he notices that his client is lying to him. There is an old classmate who is now a bookie, his cousin, a police officer, who doesn't believe C.T. is doing the job for the right reasons, and lots of action and twists.

This is a very interesting story, and Anderson Graham-Brown does a good job narrating; nevertheless, it could use a little bit of editing: there are some background noises and long pauses that could have been avoided.

But, all in all, this is a great first story in the series.

I listen to a lot of audio books. This is the worst recording I've ever heard. Every time there should be a pause, it's WAY too long, MUCH longer than other audio books. If these pauses were of normal, expected length, the recording would have been much shorter. Also, there's a distinct background noise throughout the recording. It's very obvious whenever the microphone was turned on or off.
The narrator is, at best, average, as is the story. The only thing I found interesting was that most characters had normal, even-tempered reactions to situations, much like real life.

This is the first story I’ve read/listened to by this author. I normally am a romanced reader but there was something about this story that drew me to it and I’m glad I tried it. The author did a great job of letting me know who C.T. is. He appears to be a man of integrity even though he also seems to have a bit of a lazy streak. His main worry is getting money from his parents. He does what he has to so he can continue getting money from them. His parents seem to prioritize doing good. That is one thing that they insist C. T. also do. Him being a detective came across to me as him just trying to do what is right stumbles into things working out for him. I found it funny that the people he grew up with are less that upstanding. How he deals with them kept me entertained. C.T. is comfortable in any situation. He can be talking to the worse criminal and he acts like they are BFF’s to get what he wants. This is a very good opening story for this series. The characters are pretty well defined be it his cousin or his friends. The flow of the story I think is good. I didn’t find any place to skim over. I look forward to more of his books. I enjoyed the narrator Anderson Graham-Brown, his style and tone lead a reality to the story.

Who ever heard of a reluctant detective? Well that is exactly what we get with C.T. Ferguson! He doesn't exactly want to be a private investigator...he's been enjoying freeloading off his rich parents...but that has come to an end and now he must actually work! That said, once C.T. begins working on an actual case, he realizes that he is good at this detecting thing. He has redeemed himself. Good book!
I accepted a complimentary copy of this book in exchange for an honest review.

Good plot and full of action

He was a brilliant hacker, until the Chinese stopped him, and sent him home. His parents wanted him to do pro-bono work.and give back to society, since he didn’t need the money. With his skills at finding information, this helps and hinders him. A simple case, lands him into trouble and on the run. A story that has a good plot, and full of action. Narration by Anderson Graham-Brown
brought this story to life and very well done.

This could go places

I received this title for free for my honest review and am glad I took the time to listen. if you like real life detective stories then this one delivers while not going over the top. The situation the main character is put in is relatively believable though more of the background story would have made the overall story better. I live in the general area that the story takes places and it is accurate which also helped. The only problem I had with the story was the performance; while it wasn't unpleasant to listen too all of the background noise made it a distraction. I pushed the read speed up to 1.45 and it disappeared though so consider doing that if you pick it up.

If you are looking for an in-depth mystery or some type of thriller this is not the book for you. Th main character of this book is a rich trust fund kid who went to Asia got in trouble for hacking trying to help some people, was tortured before coming back to the states where his parents are forcing him to do good for some people so he becomes a pro-bono private eye. There are a couple of women who during the course of the book become interested in him and he seems to have friends in all the right places including a detective and someone involve in organized crime. Overall it was a quick an very light listen. The audio could be better as there were pops and static noises during almost every pause. The narrator does do a decent job and multiple voices though. I obtained a free copy for the purposes of an unbiased review.