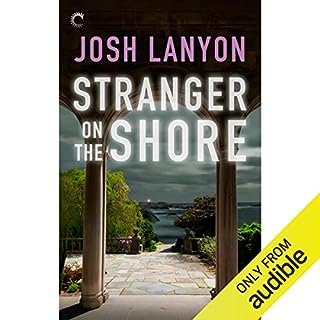 Twenty years ago little Brian Arlington was kidnapped from his family's Long Island estate and was never seen again. The trail went cold, but investigative journalist Griff Hadley has always thought there was more to the story - much more. When the Arlingtons' patriarch invites him to stay at their estate to research his true crime book, Griff can't say no. It's the story of a lifetime. But not everyone is happy about Griff's presence. Relatives and staff alike regard him coldly, including Pierce Mather, the Arlingtons' attractive lawyer.

The idea for this one was decent, though I've seen it before. The writing was good, I was just disappointed with the pacing (it was very slow), the lack of a hearty mystery (I'd solved all mysteries by the first 1/4 mark), and the chemistry between our heroes. 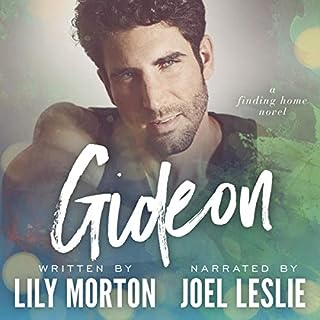 A talented, mercurial, and often selfish man, Gideon has everything he should want in life. Fame, money, acting awards - he has it all. Everything but honesty. At the advice of his agent, Gideon has concealed his sexuality for years. But it’s starting to get harder to hide, and his increasingly wild behavior is threatening to destroy his career. Then, he’s laid low by a serious illness and into his life comes Eli Jones.

Better Than I Expected

This novel was more than I expected it to be, particularly after Gideon's abhorrent behaviour in Milo. To my surprise, I actually liked Gideon and his character's gradual change as he became a better person. I really adored Eli's character; he was fresh and relatable.

Overall in the trilogy, the first (Oz) was my favourite, and this is a solid second.

Once more, Joel Leslie hit it out of the park with the narration. He's amazing. 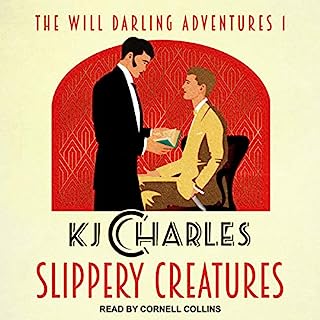 Will Darling came back from the Great War with a few scars, a lot of medals, and no idea what to do next. Inheriting his uncle's chaotic secondhand bookshop is a blessing...until strange visitors start making threats. First a criminal gang, then the War Office, both telling Will to give them the information they want, or else. Will has no idea what that information is, and nobody to turn to, until Kim Secretan - charming, cultured, oddly attractive - steps in to offer help. As Kim and Will try to find answers and outrun trouble, mutual desire grows along with the danger.

Not My Favourite By KJ Charles

I didn't enjoy this book nearly as much as I'd hoped that I would. There were two big things that really prevented me from loving it.

I can't go into detail about what it was that happened (because, spoilers), but at one point in the book, Will makes the decision to go to Kim... And it was completely the wrong decision, particularly based on how they left things, and Kim's unapologetic, lying character.

The second thing that prevented me from enjoying the book was, in fact, Kim's unapologetic, lying character. He's so unrepentant and almost villainous throughout, that I can't for the life of me understand why Will falls for him, aside from the fact that he's the only other gay man that we meet in the narrative. 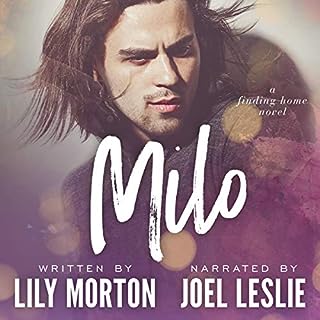 Milo has been burying himself at Chi an Mor, hiding from the wreckage of his once promising career and running from a bad relationship that destroyed what little confidence he had. Niall, his big brother’s best friend, has been there for him that entire time. An arrogant and funny man, Niall couldn’t be any more different from the shy and occasionally stuttering Milo, which has never stopped Milo from crushing wildly on the man who saved him.

Could Not Get On Board

There are so many lovely aspects to this novel, but there was one troupe that really brought the whole thing down for me. I could not get on board with Gideon's role in Milo and Niall's romance. AT. ALL. It would be one thing if their relationship was in the past or a one-time fling that no longer meant anything to either of them, but to have Gideon and Niall still actively being convenient sex partners, and then having Niall move on to Gideon's brother, Milo... AND THEN have Gideon talk to Milo about how good Niall was in bed... NOPE. This was too disgusting for me. Morton could have easily kept Gideon as Niall's best friend and left out the sex, and made him just as possessive and rude because he both wanted to teach Milo his little lesson and because he thought that Milo was trying to take his friend from him. The ick-factor was entirely unnecessary, and it ruined the book for me.

Otherwise, there were some nice parts, and I do like the author's way of writing. But a huge NOPE to this plot.

Joel Leslie as the narrator was, of course, amazing. 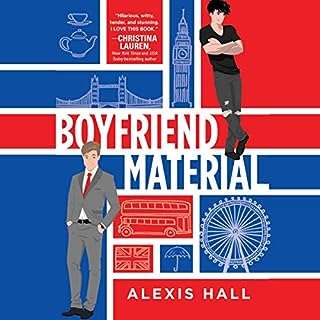 Luc O'Donnell is tangentially - and reluctantly - famous. His rock-star parents split when he was young, and the father he's never met spent the next 20 years cruising in and out of rehab. Now that his dad's making a comeback, Luc's back in the public eye, and one compromising photo is enough to ruin everything. To clean up his image, Luc has to find a nice normal relationship...and Oliver Blackwood is as nice and normal as they come. He's a barrister, an ethical vegetarian, and someone who has never inspired a moment of scandal in his life. He’s perfect boyfriend material.

This book is very funny, and definitely enjoyable if you're not expecting much in the way of plot or romance. I laughed out loud several times. The characters are genuinely lovely.

What made me put it down was the intimacy between Luc and Oliver. While there wasn't any suspense in the romance (no heat, no build-up), things had certainly been leading to the moment of their first "joining", especially after Oliver had put a stop to any intimate connection between them. That led me to expect a spectacular first sex scene when it finally arrived. Unfortunately, this book was clean and all intimacy was fade-to-black, removing what I feel is the most deeply emotional, and meaningful part of romance novels.

If you like clean romances with lots of great humour, this book is for you. It's just not for me. Enjoy! 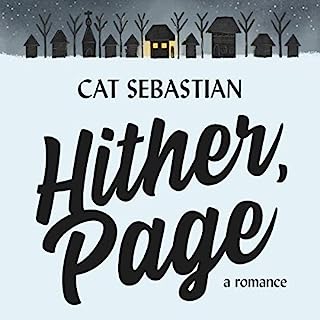 James Sommers returned from the war with his nerves in tatters. All he wants is to retreat to the quiet village of his childhood and enjoy the boring, predictable life of a country doctor. The last thing in the world he needs is a handsome stranger who seems to be mixed up with the first violent death the village has seen in years. It certainly doesn't help that this stranger is the first person James has wanted to touch since before the war.

I didn't find this novel very romantic (and certainly not as romantic as I would have liked), but I did enjoy the mystery. 3.5* 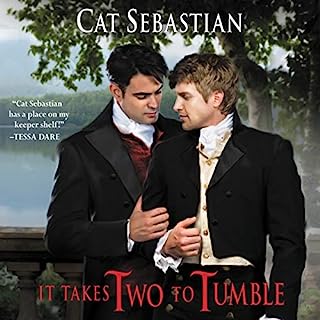 After an unconventional upbringing, Ben Sedgwick is perfectly content with the quiet, predictable life of a country vicar, free of strife or turmoil. When he’s asked to look after an absent naval captain’s three wild children, he reluctantly agrees, but instantly falls for the hellions. And when their stern but gloriously handsome father arrives, Ben is tempted in ways that make him doubt everything.

This was a low-angst novel with some meandering plot and likeable characters. I wasn't quite riveted, but I did enjoy it. 3.5* 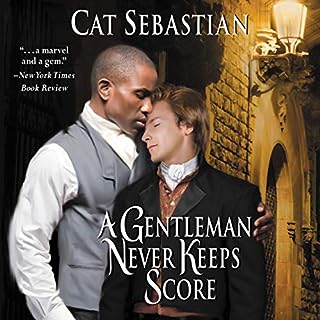 Once beloved by London's fashionable elite, Hartley Sedgwick has become a recluse after a spate of salacious gossip exposed his most-private secrets. Rarely venturing from the house whose inheritance is a daily reminder of his downfall, he’s captivated by the exceedingly handsome man who seeks to rob him. Since retiring from the boxing ring, Sam Fox has made his pub, The Bell, into a haven for those in his Free Black community. But when his best friend Kate implores him to find and destroy a scandalously revealing painting of her, he agrees.

** spoiler alert ** I enjoyed the story, and quite liked Sam's character. The one main thing that bothered me, though, was the fade-to-black on their one penetrative sex scene. This normally wouldn't be a problem, especially after the earlier sexy scenes, but in this particular plot, and with these particular characters, it was a huge let-down. All arcs were all leading to that moment. Since Hartley had his personal issues with touching, they'd not done much of it, so this moment when they're finally able to embrace each other (etc) was supposed to feel like a really big deal. But fading to black didn't let us see how it impacted Hartley, and it didn't let us see how Sam soothed him.

Truthfully, the rest of the book was good, but this one fact, the fact that the culmination of all arcs was ignored like that, was what ruined the entire experience for me. 3.5* 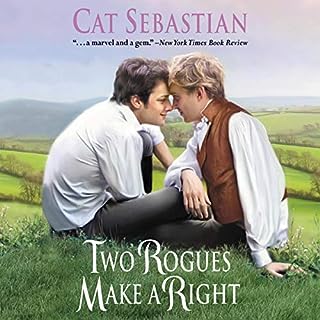 Will Sedgwick can’t believe that after months of searching for his oldest friend, Martin Easterbrook is found hiding in an attic like a Gothic nightmare. Intent on nursing Martin back to health, Will kindly kidnaps him and takes him to the countryside to recover, well away from the world. Martin doesn’t much care where he is or even how he got there. He’s much more concerned that the man he’s loved his entire life is currently waiting on him hand and foot, feeding him soup and making him tea. Martin knows he’s a lost cause, one he doesn’t want Will to waste his life on.

This book starts off very sweet. I love that it's inclusive, etc. My problem with this novel, is that while there isn't much in the way of plot, there's no steam, and the romantic arc made me upset. When Martin pulls a stupid, it dragged on way longer than necessary. The whole thing just made me angry with both Martin and Will in a way that could not be redeemed by a happy ending. 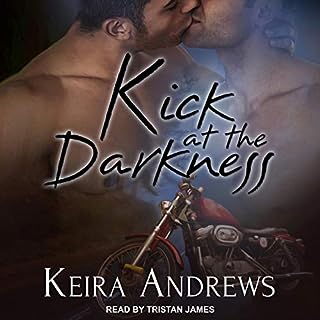 College freshman Parker Osborne is having the worst day ever. He humiliated himself trying to pick up a cute guy, he hasn't made any friends at school, and his stupidly hot jerk of a TA gave him a crappy grade on his paper. He's going to drop Adam Hawkins' film class and start fresh tomorrow after he's had a good sulk. But Parker's about to find out what a bad day really looks like - if he can survive the night. A virus is unleashed, transforming infected people into zombielike killers.

For a zombie apocalypse romance novel, this was surprisingly disappointing. I saw so many reviews praising how "scary" this book was, but it really failed to deliver. It wasn't scary. There were a few moments of suspense, but the majority of the book takes place in various hiding spots.

As for the relationship between our heroes... I found myself rolling my eyes or cringing when the romance started. I love a good "enemies to lovers" romance, but this was just so awkward. First of all, I don't know any men that would invade another's privacy by joining them in the shower. A public shower, yes, but nothing so intimate as a single shower. Then, when things finally turn sexy, permission is asked, but never received before the awkward touching begins. There isn't enough of a build-up, no tension to keep me interested...or to even give me a clue that it was going to happen.

The ending (the last 1/4 of the book) was very disjointed from the trajectory of the story. Andrews added new characters, new mysteries, new conflict, and new threats. Then, after their escape, everything was very rushed. It felt as though Andrews knew that she was reaching the end of the novel and couldn't wait to get there. Scenes were abbreviated/summed up, and then everything was ended without any real satisfaction.

The narration wasn't the best. My issues are numerous, but I don't think it's fair to the narrator to pick his performance apart.