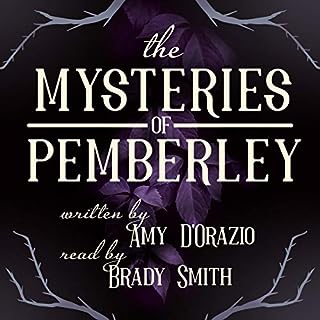 Elizabeth Bennet made her sister a promise on her deathbed: to love and care for her son, young Charles Bingley, like her very own child. And so she did, for four years, until the boy's guardian, Fitzwilliam Darcy showed up in Meryton, insisting on removing the boy from his aunt, his life, and everything he knew, to be raised at Pemberley.

The Mysteries of Pemberley is delightfully gothic and romantic. This is another excellent book by Amy D’Orazio. 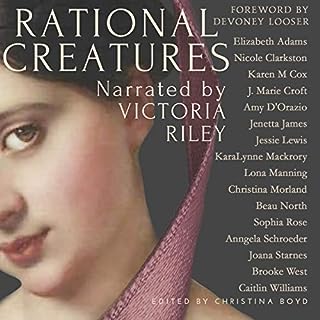 In the third romance anthology of The Quill Collective series, 16 celebrated Austenesque authors write the untold histories of Austen’s heroines, brave adventuresses, shy maidens, talkative spinsters, and naughty matrons. Rational Creatures is a collection of humorous, poignant, and engaging short stories set in Georgian England that complement and pay homage to Austen’s great works and great ladies who were, perhaps, the first feminists in an era that was not quite ready for feminism.

I particularly appreciated reading the stories of secondary, often overlooked characters, such as Miss Bares and Mrs Croft. The narration was solid. It is an easy recommendation for any Austen fans. 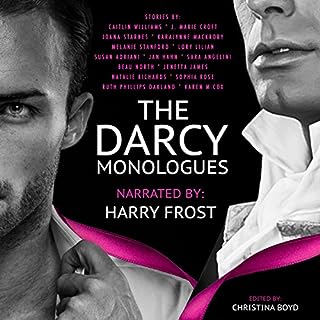 In this romance anthology, 15 Austenesque authors assemble to sketch Darcy's character through a series of reimaginings, set in the Regency through contemporary times - from faithful narratives to the fanciful. In The Darcy Monologues, the man himself reveals his intimate thoughts, his passionate dreams, and his journey to love - all told with a previously concealed wit and enduring charm.

The stories range from modern to Regency, with a couple of stops along the way. While there is some variation in how much I liked the individual efforts, overall it is a great listen and one sure to be enjoyed by fans of Mr Darcy.

Harry Frost did an amazing job. 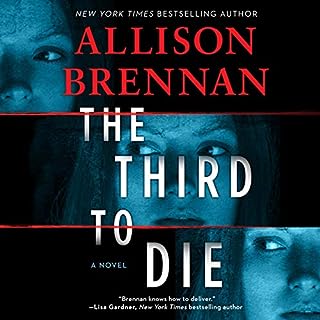 Detective Kara Quinn, on leave from the LAPD, is on an early morning jog in her hometown of Liberty Lake when she comes upon the body of a young nurse. The manner of death shows a pattern of highly controlled rage. Meanwhile in DC, FBI Special Agent Mathias Costa is staffing his newly minted Mobile Response Team. Word reaches Matt that the Liberty Lake murder fits the profile of the compulsive Triple Killer. It will be the first case for the MRT. This time, they have a chance to stop this zealous, if elusive, killer before he strikes again.

Great start to a new series

I'm a big fan of Allison Brennan's and if you like her previous books, you should enjoy this one, too.

The narrator is new to me and, while overall I think she did a fine job, I found her reading to be a bit flat at times. 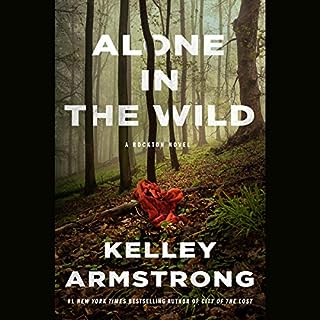 Every season in Rockton seems to bring a new challenge. At least that's what Detective Casey Duncan has felt since she decided to call this place home. Between all the secretive residents, the sometimes-hostile settlers outside, and the surrounding wilderness, there's always something to worry about. While on a much needed camping vacation with her boyfriend, Sheriff Eric Dalton, Casey hears a baby crying in the woods. The sound leads them to a tragic scene: a woman buried under the snow, murdered, a baby still alive in her arms.

This series gets better and better

Therese Plummer did a fantastic job with the book, as she has with all of the others in the series. The story itself reminded me why I adore Kelley Armstrong. Her world-building is amazing, and I love that the characters in her series grow and develop from book to book. 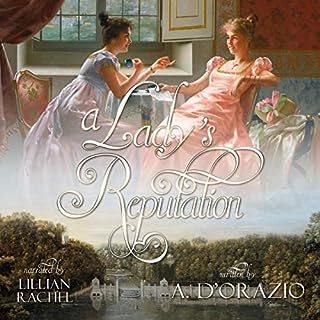 “Mr Darcy, I am eager to hear your explanation for the fact that quite a few people believe we are engaged.” It starts with a bit of well-meant advice. Colonel Fitzwilliam suggests to his cousin Darcy that, before he proposes to Elizabeth Bennet in Kent, perhaps he ought to discuss his plans with their families first. What neither man could have predicted however was that Lord Matlock would write the news to his sister, or that Viscount Saye would overhear and tell his friends, or that his friends might slip a little and let their friends know as well.

This was another very enjoyable read by Amy D’Orazio. The premise is straightforward—Darcy shares his plan to wed Elizabeth with his family and Mr Bennet before he proposes to her. Turns out his family lives to gossip, and, before you know it, Elizabeth (and Darcy) finds herself in a very difficult situation. Along the way to a happy ending, we get to know some truly delightful characters. (Lord Saye is particularly amusing, and I love the relationship between him, Col. Fitzwilliam, and Darcy.) I enjoyed this take on Bingley, too, which was an uncommon one. I could see some readers not liking it, though. There is some angst, but nothing over the top.
The narration was solid. 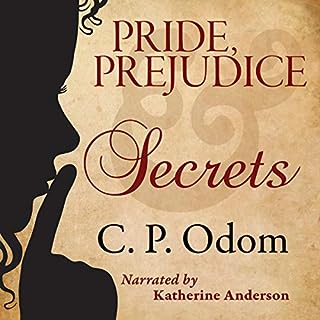 One of the turning points in Jane Austen's Pride and Prejudice is Miss Elizabeth Bennet's passionate refusal and denunciation of the equally passionate but infinitely more repressed Fitzwilliam Darcy. However, unforeseen events can lead to the most unexpected consequences. During a visit with her friend, Charlotte Collins, at Hunsford, Elizabeth falls prey to illness for almost the first time in her life just as Mr. Darcy comes to call. Befuddled by her illness, she misinterprets his proposal of marriage, and a simple nod of acknowledgment is mistaken for acceptance.

I’m a little torn about this review, both for the story and reader.

First, narration. Katherine Anderson has a very pleasant voice; it is clear and easy to understand throughout the book. I do think a little more distinction between the characters’ voices would have helped, however. I would absolutely listen to other books she’s narrated.

Second, story. It, too, was pleasant. Elizabeth accepts Darcy’s proposal when she is sick and not really fully aware of what she is doing. Post-illness (which is not a source of angst; she is not that ill), she ends up feeling obligated to go on with the engagement, although at first does think about breaking it. She quickly realizes that he is a good man. She never learns of his interference in Jane and Bingley’s relationship-although in canon, she did suspect it-and the couple never argue about Wickham. The book does spent a good while on what the change in Elizabeth and Darcy’s relationship means for other people, including Jane and Wickham, which is interesting.

While I do understand why and how C. P. Odom has E&D end up as they do, I ended up feeling that their relationship was too easy, given the set up (i.e. Elizabeth accepting against her reason, then, because Darcy told everyone about it immediately, stuck). More conflict between them would have helped—in my opinion. I know that many people prefer ‘our dear couple’ to have an easier path, and that’s fine, too.

In the end, it was an enjoyable listen, and I would recommend it, particularly for those who prefer a lower-angst story. 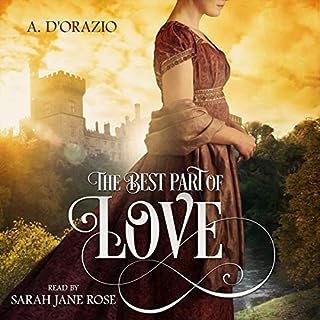 When Fitzwilliam Darcy meets Miss Elizabeth Bennet, his heart is almost immediately engaged. Seeing the pretty lady before him, a lady of no consequence or fortune, he believes he should not form an attachment to her, unsuitable as such a woman is to be his wife. What he cannot see, however, is the truth. That the simple country girl harbors a secret. Before she meets Darcy, Elizabeth has spent two years hiding from the men who killed her beloved first husband.

In the 4.5 range and definitely recommended.

This is an interesting variation on the Darcy and Elizabeth story. There is some angst, but not an excessive amount.

I found Mrs Bennet very diverting, when the story had us in Meryton. I also liked the uncommon version of Georgiana that was introduced at the start of the story, and who was important to the plot. Her role seemed to diminish and practically disappear after a certain point and, although I knew where she was and why, I did expect her to get mentioned or even make a reappearance later in the story.

The mystery part of it was well done. Some I could sort out pretty easily and early on, and I think the reader is supposed to, but there was a twist or two that kept it interesting and kept it from being mundane. I enjoyed the climax of it (Go, Lizzy! Go, Darcy! - read it and you’ll see what I mean).

I would have liked a little more of Elizabeth’s reaction to all of the revelations at the end, but I also understand why it was time to wrap up the story. I also know that I have an uncommon attachment to wanting to get into the thoughts and emotions of characters to understand the consequences of events on them and I suspect most readers would not miss seeing more of Elizabeth’s reaction.

I’ve read others by this author before and certainly will read more. 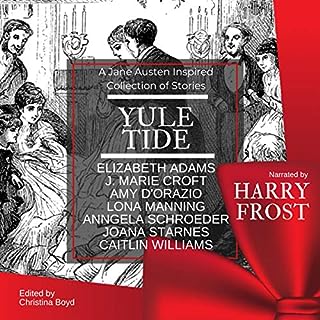 A holiday short story anthology with some favorite Austenesque authors, YULETIDE is inspired by Jane Austen, PRIDE & PREJUDICE and the spirit of the season. Regency and contemporary alike, each romance was dreamt to spark love, humor, and wonder while you dawdle over a hot cup of tea this Christmas.

This is a charming collection of Pride and Prejudice inspired short stories, all with a Christmas theme. It is a mix of Regency and modern tales. As you’d expect, some stories are stronger than others, but as a whole, it is very enjoyable.

The narrator was fantastic. 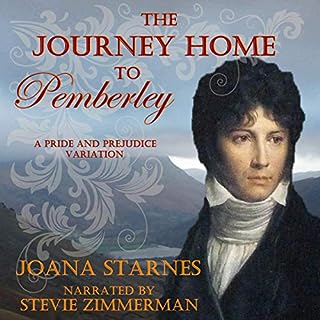 A chance encounter in the wilds of the North brings more joy to Elizabeth and Mr Darcy than either of them dared hope for. But her world is rocked by blow after blow - and the truth would only cause him pain. ‘I must be cruel only to be kind’ is Elizabeth’s guiding precept, and she chooses her path. Yet time, circumstances and new acquaintances teach her she had made a terrible mistake. How can she regain what she had lost and rebuild a future with the only man she will ever love, but for whom disguise of every sort is his abhorrence?

Another solid book by Ms Starnes

I have read and/or listened to all of Joana Starnes' books and they are always enjoyable. The settings are wonderfully explained, the plots well thought out and the characters believable. The resolution between Darcy and Elizabeth was perhaps a bit too swift for my liking, but it did not require anyone acting out of character, so this is mainly about personal preference.

Stevie Zimmerman did an awesome job, as always.