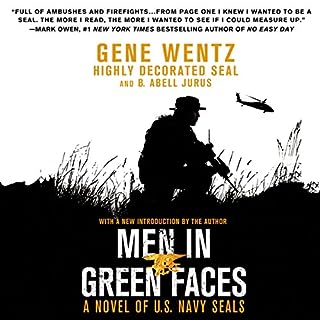 Gene Wentz's Men in Green Faces is the classic novel of Vietnam that inspired a generation of SEALs. Here is the story of a good soldier trained to be part of an elite team of warriors - and of the killing grounds where he was forever changed. Gene Michaels carries an M-60, 800 rounds, and a Bible. The ultimate SEAL, he also carries a murderous grudge against a bloodthirsty colonel who was once one of their own.

Completely thrilling. I could not stop listening.

This book was great. from stay to finish, I loved it. I think I stopped listening only to do some work.