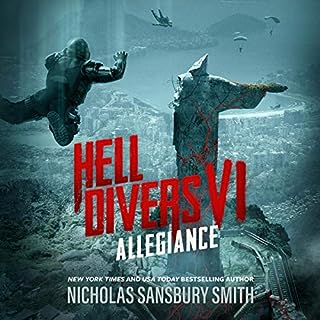 After a long and bloody battle, legendary Hell Diver Xavier Rodriguez reigns as the dutiful but reluctant new king of the islands. Advised by a council of former sky citizens as well as Cazadores, he works to assimilate the two societies peacefully. But not all Cazadores have accepted the new order. While X tries to ease tensions at home, a rookie team of divers, led by Michael Everhart, returns to the skies in Discovery, formerly the ITC Deliverance. Their mission: To locate other human survivors throughout the world and rescue them.

Amazing book on its own and incredible series

Loving the continuous character development throughout the series, the struggles between characters / factions and the realistic outlook to this world. I couldn't stop listening to this book after I started to listen! Cant wait for book 7 !!!!!