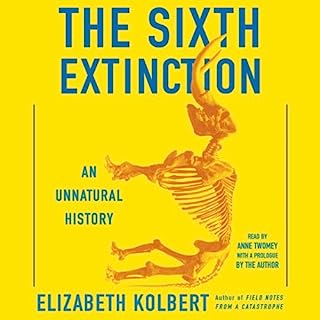 A major audiobook about the future of the world, blending intellectual and natural history and field reporting into a powerful account of the mass extinction unfolding before our eyes. Over the last half a billion years, there have been five mass extinctions, when the diversity of life on Earth suddenly and dramatically contracted. Scientists around the world are currently monitoring the sixth extinction, predicted to be the most devastating extinction event since the asteroid impact that wiped out the dinosaurs.

A fascinating book that belongs in every library. Was a bit turned off when the author was introducing the book, but the narration levelled out and was not all that bad. #Audible1

Paulo Coelho's enchanting novel has inspired a devoted following around the world. This story, dazzling in its simplicity and wisdom, is about an Andalusian shepherd boy named Santiago who travels from his homeland in Spain to the Egyptian desert in search of treasure buried in the Pyramids. Along the way he meets a Gypsy woman, a man who calls himself king, and an Alchemist, all of whom point Santiago in the direction of his quest.

Must-listen for every library!

The Alchemist by Paulo Coelho is a fictional masterpiece — and the narration from Jeremy Irons is mind-numbingly enchanting. I listen to it every night before bed! #Audible1