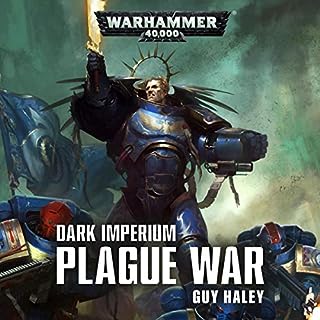 Intent on rebuilding Ultramar, the returned primarch Roboute Guilliman wages war on the treacherous Death Guard - but as he battles his corrupted brother, the intervention of a greater power threatens all he works for. In the void and upon the worlds of Greater Ultramar, the battle for the Imperium continues. Intent on rebuilding his home realm and using it as base to reconstruct the ravaged stellar empire of mankind, the returned primarch Roboute Guilliman proceeds with his war to drive Mortarion and his Death Guard Traitor Legion from the domain of the Ultramarines.

An improved continuation of Dark Imperium

This book was great, much better than Dark Imperium, in my opinion. The pace was faster, the story was more engaging and the characters were more interesting. It is a continuation of the Plague War, surely to be followed by a third book. There are some huge plot points here with possibly massive ramifications for the Imperium as a whole. Guilliman's character is further fleshed out in interesting ways, his faith - or, rather, the lack thereof - further tested. I'm really curious to see how the state of the Imperium after the Great Rift and Guilliman's return changes. Looking forward to the third book. 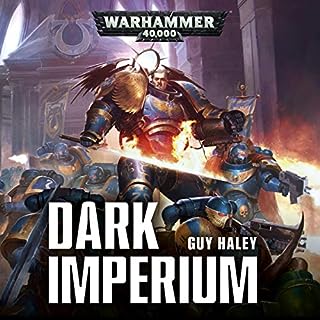 Fell times have come to the galaxy. Cadia has fallen, destroyed by the onslaught of Chaos. A Great Rift in the warp has opened, and from its depths spew daemons and the horrors of Old Night. But all hope is not lost.... A hero, long absent, has returned, and with him comes the wrath of the Ultramarines reborn. Roboute Guilliman has arisen to lead the Imperium out of darkness on a crusade the likes of which has not been seen since the fabled days of the Emperor.

Documentary on Guilliman and Ultramar

This is a good book but do not expect an engaging drama and quick-paced story. It is basically an insight into the current state of the Imperium (mainly Ultramar) post the Indomitus Crusade and Guilliman's place in it. The story is slow and there are multiple threads with different characters and places in each thread, not necessarily intertwining together but being part of the whole Ultramar theatre. I found the thread with Varans and his fellow soldiers on Iax quite pointless, I guess it was meant to show a human perspective and introduce Iax to the reader.
The book touches on the dilemmas of Primaris Marines and their place in the chapters. We get a lot of information about Guilliman's character post his revivification, his feelings and opinions regarding the current state of the Imperium, the Emperor and his divinity and his plans for Ultramar and the Imperium.
Particularly interesting are some of the interactions between Guilliman and other high-ranking Ultramarines officers (Calgar) and some lower-rank humans and how the new hierarchy affects them.
The book is the beginning of what will likely be a trilogy about the Plague War in Ultramar and we meet some of the Nurgle characters, e.g. Mortarion and Ku'gath..