When Gunnar learns the king of Highcastle will grant an audience to anyone who wins an arena championship, he decides to enter the competition as a gladiator. If he can earn a meeting with the ailing king and persuade him to stop Dryden before his dragon flies, he can save Edgewood and countless lives. He'll also get his name posted in every arena, which could lead Rachel one step closer to finding him. Does Gunnar have what it takes to become a champion, or has he bitten off more than he can chew?

Loved the storys progression and the character builds, cant wait for the next book to come out. #audible1 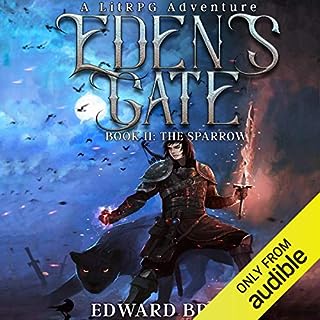 After accepting the fact that he will never know his old reality again, Gunnar looks forward toward building a new life inside Eden's Gate. It's time to form a guild, gather resources, and earn the acceptance of the Edgewood inhabitants. If only things were that easy. The dark elves aren't thrilled about having humans in Edgewood, the mine isn't vacant, and you can't form a guild without at least a few guild mates.

This book has a great story line, if you love fantasy and rpg videos games this is a must read. #Audible1