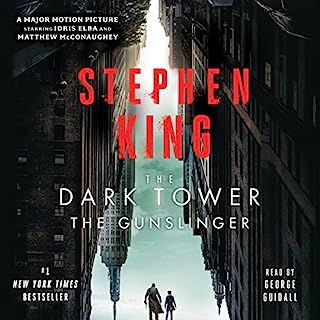 In the first book of this brilliant series, Stephen King introduces listeners to one of his most powerful creations: Roland of Gilead, The Last Gunslinger. He is a haunting figure, a loner on a spellbinding journey into good and evil. In his desolate world, which frighteningly mirrors our own, Roland tracks The Man in Black, encounters an enticing woman named Alice, and begins a friendship with the boy from New York named Jake.

I found this narrator pretty bland and hard to listen to. Wife almost wanted to stop listening. Good book but bad performance. Next one was much better