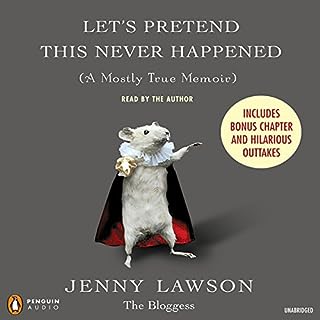 For fans of Tina Fey and David Sedaris - Internet star Jenny Lawson, aka The Bloggess, makes her literary debut. Jenny Lawson realized that the most mortifying moments of our lives - the ones we'd like to pretend never happened - are in fact the ones that define us. In Let's Pretend This Never Happened, Lawson takes readers on a hilarious journey recalling her bizarre upbringing in rural Texas, her devastatingly awkward high school years, and her relationship with her long-suffering husband, Victor.

A book I will listen to again

I don’t usually ever read a book a second time but this is an exception. One of the best audiobooks I’ve listened to. Jenny’s style lends perfectly to the audio format and her humour and storytelling were supremely entertaining. Loved it.

This book evokes great feeling. I enjoyed the descriptive world given to us by the author and felt deeply all the mixed emotions of the narrator. It gives incredible insight into the native experience of the residential school system. A must read for all Canadians in my mind.
The performance was well done but painfully slow for my liking. However once I increased to 1.25x listening rate, it was perfect!