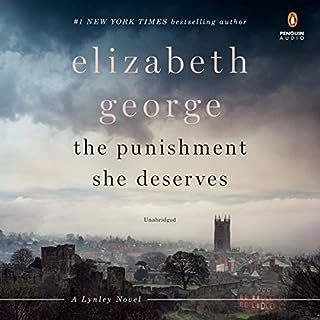 The cozy, bucolic town of Ludlow is stunned when one of its most revered and respected citizens - Ian Druitt, the local deacon - is accused of a serious crime. Then, while in police custody, Ian is found dead. Did he kill himself? Or was he murdered? When Barbara Havers is sent to Ludlow to investigate the chain of events that led to Ian's death, all the evidence points to suicide. But Barbara can't shake the feeling that she's missing something.

#Audible1 - Elizabeth George is an exquisite mystery writer and keeps drawing one into the plot further and further. Just when one believes they have the mystery figured out there is a new piece of evidence dropped in that turns one in a different direction; tantalizing one to think and listen more carefully and to even go back in the story. I wish I would have been aware of the whole "Inspector Lynley Series" at the beginning. I would have started with the first in the series instead of starting at book 17 to 20. Now I will wait with as much patience as one can muster for book 21. The author also does a good job of keeping the main characters in her books actively involved, at least in each of the stories I have listened to. Thank you for a great listen.
I will very likely go back and enjoy the first 16 books in the Inspector Lynley Series just for sheer entertainment.