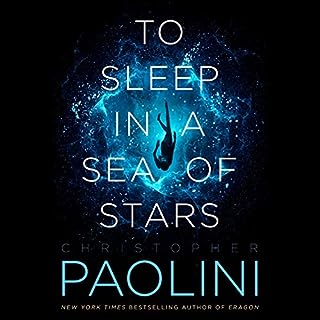 During a routine survey mission on an uncolonized planet, Kira finds an alien relic. At first she's delighted, but elation turns to terror when the ancient dust around her begins to move. As war erupts among the stars, Kira is launched into a galaxy-spanning odyssey of discovery and transformation. First contact isn't at all what she imagined, and events push her to the very limits of what it means to be human. While Kira faces her own horrors, Earth and its colonies stand upon the brink of annihilation. Now, Kira might be humanity's greatest and final hope....

The narration was solid but not overly engaging, the story itself had the same beautiful writing found in the Inheritance Cycle but parts of the story still feel very mystical and unrealistic. The beginning blew me out of the water for sure and the depth of technology, language, all that jazz- sensational!!