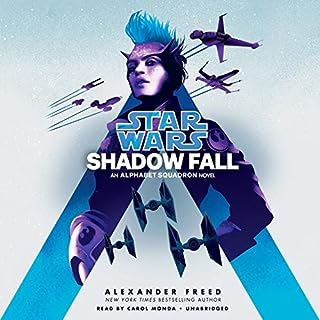 News of the New Republic's victory still reverberates through the galaxy. In its wake, the capital ships of the newly legitimized galactic government journey to the farthest stars, seeking out and crushing the remnants of imperial tyranny. But some old ghosts are harder to banish than others. And none are more dangerous than Shadow Wing.

Saskia Maarleveld’s narration in Alphabet Squadron is one of the best audiobook performances I’ve heard. It made a very good book into a near perfect experience.

I preordered this book as soon as it was listed. At the time it named the reader as To Be Decided. I’ve seen this before and usually sequels end up with the same reader as the original, so I didn’t think anything of it.

It wasn’t until I started listening to it that I found out the reader had changed. The new reader isn’t great, to say the least. It was quite jarring and VERY disappointing. I may get this book in hard copy and try again.