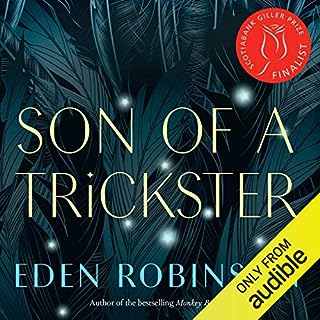 Everyone knows a guy like Jared: the burnout kid in high school who sells weed cookies and has a scary mom who's often wasted and wielding some kind of weapon. Jared does smoke and drink too much, and he does make the best cookies in town, and his mom is a mess, but he's also a kid who has an immense capacity for compassion and an impulse to watch over people more than twice his age, and he can't rely on anyone for consistent love and support, except for his flatulent pit bull, Baby Killer (he calls her Baby) - and now she's dead.

I love Eden Robinson's books. This one, while slow to start, turns into a wild ride. I love the mix of traditional legends and contemporary life blended together. I've been wanting a story that some how incorporates indigenous stories, characters, legends, spirituality into a story based in today. Robinson's other book Monkey Beach has quite a bit of this in it too.
The narration bugs me though. The story is set on the west coast of Canada. The characters are mostly indigenous people from up and down the pacific coast, which happens to be exactly my background (indigenous from the PNW) when one of the grandmothers was narrated having a Newfie accent (east coast of Canada for those unaware) it irked me. Then when the neighbour, who is from Northern British Columbia, speaks in a Eastern European accent it just added to my annoyance. The pronunciation of place names was also annoying. I don't think these things would annoy me so hard if I didn't know people who are so much like the characters and if I wasn't so familiar with the places in the book.