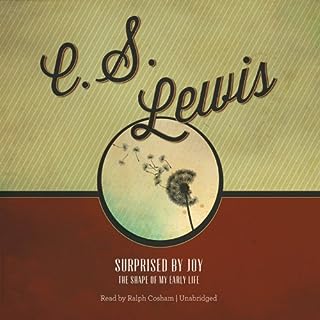 In this book, C.S. Lewis tells of his search for joy, a spiritual journey that led him from the Christianity of his early youth into atheism and then back to Christianity.

Spending time with the man

I listened to this for the 1st time to understand where Lewis came from, what inspired him, what made him the author that I loved & what I could use to become a better writer & a better man.
I listened to it a second time to hear again the world that was the 1st half of the last century, but mostly I found I just enjoyed spending time with him in these memories & thoughts. I haven’t read a 1/4 of the books he likes to reference that impacted him, but I still get something out his thoughts on them.
I get a lot out of this book. Lewis became my hero, but this book helps humanize him. A hero because he can put into words a conversion experience that is so thoughtful & grounded, & human because he, though this kind of scholarly life could easily sound snobbish, is a person I can easily understand; like a friend who is very different & lives in a very different world, & yet I hear him for who he is. 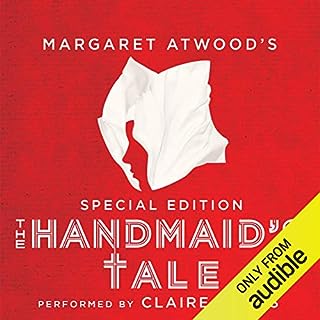 Anyone who would describe this book as feminist, or anti-religious or anti-patriotic would be mistaken.

As a guy, part of my goal of listening to this was to find a greater understanding of a woman’s heart, perspective of the world, & female-specific suffering. However, Handmaid’s Tale is not specifically about any of these things. Its about how drastically a nation can be changed overnight, that America could become like communist Germany, or like a Christian version of a severe fundamentalist Islam. It’s about smaller power struggles amongst realistic characters in a nation ruled by evil dictatorship, & looking at the world from the bottom up. It obviously has female perspective, heart & specific struggles, but I don’t believe that’s the point.

The main character has real flaws, tries desperately at times to control her fate in a situation where control is so completely denied her, & endures terrible hardship. A full understanding of everything terrible that’s happened & is happening never really comes to her, nor the reader. I only feel like I finally understood it when I listened to the author’s notes at the end.

I found especially the 1st half very hard to listen to, as more popular stories star hero’s that make big changes to their world. But, I do feel a deeper understanding of the real world as a result of finishing it. If you think you can make it through a book where the character’s real name is never given, their assigned (fake) name is only mentioned 1/2 way through & the story is not forthcoming with the details of why things are the way they are, I would highly recommend it. I would also warn that the plot is slow. What kept attracting me back to it is largely the poetry laced in to the narrative. This is beautiful, however I would also warn that this often-times-poetic-narrative is also not linear, & I definitely felt lost in flashbacks and asides within flashbacks & asides.

The reader is consistently clear & subtle in her expression, but I would prefer someone who could read it less somber. I feel that there are moments of sardonic humour that could be expressed better, & it would help vary the tone.

Overall it is expertly written & I can say that it deserves to be popular.