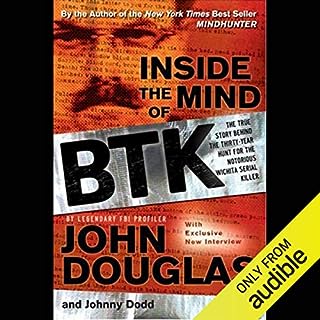 This incredible story shows how John Douglas tracked and participated in the hunt for one of the most notorious serial killers in U.S. history. For 31 years a man who called himself BTK (Bind, Torture, Kill) terrorized the city of Wichita, Kansas, sexually assaulting and strangling a series of women, taunting the police with frequent communications, and bragging about his crimes to local newspapers and TV stations.

It's an interesting book. I could have enjoyed it as much as Mindhunter had they not decided to hire the kid in high school who breaks into a cold sweat when the teacher calls on him to read aloud. This Narrator is the worst I've ever heard. His mispronunciation of several words is distracting. I found myself waiting for the cringe and wondering how this guy even got this job. The words he actually can pronounce, he reads in a robotic tone with weird pauses that you will recognize as someone who is barely literate. I would never listen to anything by this narrator again.