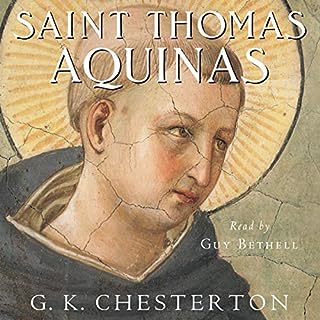 This is a top-quality audiobook of G. K. Chesterton's biography of St. Thomas Aquinas.

A great sketch of a great thinker

I love Chesterton's skills as a writer and thinker. My problem is that the beauty of the prose can get in the way of the concentration on the ideas. My dislike had to do with the economics. The Scholastics were much better on usury and trade than either Chesterton or Aquinas. 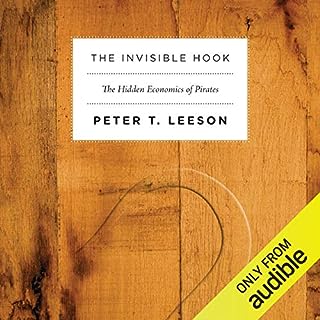 As expected from Leeson...

How is this for cool? You open up the book or listen to the audio and encounter the dedication reading, "Ania, I love you; will you marry me?" Spoiler. She said yes.

I love the book's opening line, "Charybdis herself must have spat them into the sea." That is followed by a wonderful first paragraph that had me hooked.

Leeson teaches at the economics department at George Mason University. He is very smart and usually very interesting. And this book is very, very interesting. Leeson explains why building a brand was as important for pirates as it is for today's shoe or tech companies. He explains why the Skull & Bones flag was very important, how pirates managed to govern themselves by using a checks and balances system long before Maddison adopted the idea for the US Constitution. The Invisible Hook depends on sound economic theory to explain these and many other factors. If you are interested in pirates or interested in economic theory this book is for you. The performance is fine. The narrative works well and moves along. Five stars. 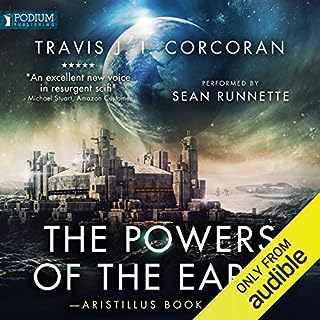 Earth in 2064 is politically corrupt and in economic decline. The Long Depression has dragged on for 56 years, and the Bureau of Sustainable Research is hard at work making sure no new technologies disrupt the planned economy. Ten years ago, a band of malcontents, dreamers, and libertarian radicals bolted privately developed antigravity drives onto rusty seagoing cargo ships, loaded them to the gills with 20th-century tunnel-boring machines and earthmoving equipment, and set sail - for the moon.

Good Libertarian Narrative but a bit over the top.

I love the story. Earth governments are too large and too intrusive. Their overregulation and taxes make life difficult and suppress individual liberty. The discovery of an anti-gravity drive makes it possible to set up living areas on the moon so hard working people looking for a life of liberty wind up settling in one area. The governments are failing and need an excuse. They say that people are avoiding paying taxes and using resources that governments should be controlling and allocating.

The story includes hard anarchist types, genetically modified dogs, and even an artificially intelligent entity. Heinlein fans may be a bit pleased as well as pi$$ed off because there are elements from The Moon is a Harsh Mistress. But if you can ignore the over-the-top enthusiasm for liberty and are not an authoritarian type you should enjoy the story. 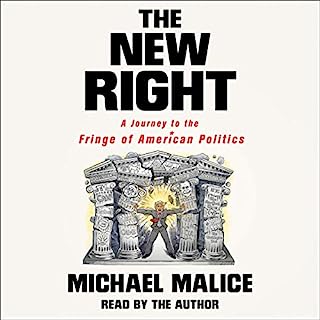 From the heterodox right wing of the 1940s to the Buchanan/Rothbard alliance of 1992 and all the way through to what he witnessed personally in Charlottesville, The New Right is a thorough firsthand accounting of the concepts, characters and chronology of this widely misunderstood sociopolitical phenomenon. Today’s fringe is tomorrow’s orthodoxy. As entertaining as it is informative, The New Right is required listening for every American across the spectrum who would like to learn more about the past, present and future of our divided political culture.

The book delivers full Malice as expected. While most will miss the final in-joke of, "last but certainly least Tom Woods", I am sure that they will get many of the jokes and appreciate the irony and ridicule. This is a serious topic and Malice has delivered. But he did it in an interesting way and made me laugh out loud a number of times. Even my sons, who hate politics, loved some of the parts and could not help laughing at some of the ridicule.

Malice is an anarchist and begins the book with a shocking (to ordinary people) quote from Murray N. Rothbard's, For a New Liberty: The Libertarian Manifesto. He goes on to give a review of such Libertarian, New Right, and Conservative luminaries as Ayn Rand, Leonard Read, Ludwig von Mises, Ron Paul, Hans-Hermann Hoppe, Lysander Spooner, Ron Paul, and Murray Rothbard. He takes his shot at everyone, mentions the autistic types that one finds in the Libertarian movement but gets hist shots in on everyone even as he says quite a few kind things.

He talks about New Right personalities like Mike Cernovich, Anne Coulter, Jared Taylor, Alex Jones, Mencius Moldbug, Milo Yiannopoulos, Chris Cantwell, and plenty of others. He takes his shots but is not afraid to credit good ideas even when he does not like the individual.

My one issue is his use of Socratic irony to find the flaws in all positions offered by others while not presenting a clear positive perscription of his own. That having been said, he does something that I did not expect and recommended one of my favourite books (available from Audible as well as Kindle), The Machiavellians, by James Burnham. Anyone interested in political theory needs to read that book because the insights are very illuminating. Malice is bright, funny, and convincing. Loved the audiobook and the Kindle version. 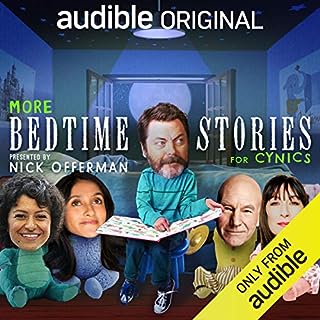 Make sure the kids aren’t around! Just because you’re a grown-up doesn’t mean you can’t enjoy the art of the children’s bedtime story. Nick Offerman presents this collection of 15 short stories written in the style of a classic kid’s tale, but with a decidedly dark and adult approach.

This was horrible to try to listen to. While I was OK with one of the stories, most of what I heard was politically correct nonsense. The Evangelical Hollywood Left needs to stop or it will destroy any credibility it has left. Time to move on, boys and girls. Go and listen to Mikail Bulgakov, Mark Twain, Jane Austen, or some other real literature and leave this junk behind. 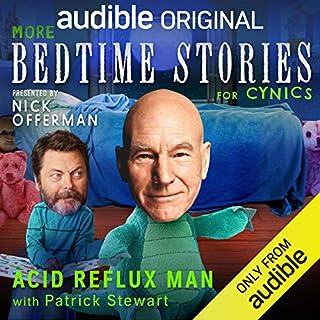 A middle age man is haunted by the voices of his own aging body.

Perhaps the author was being ironic and I missed it but I doubt that was the case. While I have no problem with the critique of habits that ruin many people's lives the story seems cheap and preachy.