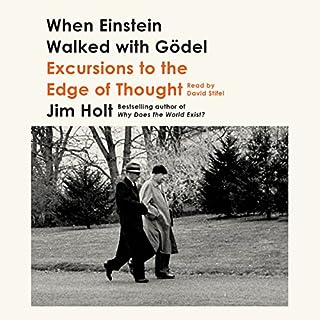 Does time exist? What is infinity? Why do mirrors reverse left and right but not up and down? In this scintillating collection, Holt explores the human mind, the cosmos, and the thinkers who’ve tried to encompass the latter with the former. With his trademark clarity and humor, Holt probes the mysteries of quantum mechanics, the quest for the foundations of mathematics, and the nature of logic and truth. Along the way, he offers intimate biographical sketches of celebrated and neglected thinkers, from the physicist Emmy Noether to the computing pioneer Alan Turing and the discoverer of fractals, Benoit Mandelbrot.

I really enjoyed the first half of this audible, interesting and informative history of science, mathematics and some philosophy. I learned quite a bit about some historical figures whom I had previously only known by name. But then came an entire chapter on Ada Lovelace, so far the only woman given any thought in the book, shamelessly devoted to insulting, degrading, and dismissing her as a person and as a contributor to the history of computer science. No other subject of his essays, all men as a matter of fact, were met with such a scathing outpouring of pure contempt and disrespect. I was genuinely shocked while listening to the author personally attack the integrity of this celebrated historical figure without giving her due credit. He treats his other subjects' accomplishments and moral/professional failures with well-deserved fairness, after all they're still people too, but his tone completely shifts when writing about the one woman in this book - taking some historical controversy about her as brute uncontroversial fact, refusing to recognize any historical contribution by her or afford her any credit whatsoever, and overtly attacking her personal character without the same fairness and unbiased attitude as he did in his other essays, ie. Godel wasn't insane, he starved himself to death because he was just 'eccentric' and 'blinded by the sun outside Plato's cave' whereas Lovelace had nervous anxiety because she was a good-for-nothing abusive dug-addicted plagiarizing megalomaniacal whorish fraud. To compare, Holt mentions the names and ideas of morally questionable male figures, such as Heidegger - a literal Nazi supporter, numerous times throughout these essays without any such disgraceful condemnations or accusations as those he makes of Ada Lovelace. I simply cannot enjoy the rest of this book knowing that it's author has such a twisted, biased view of people.