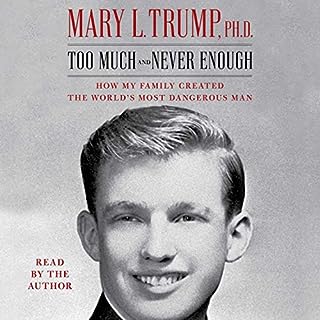 In this revelatory, authoritative portrait of Donald J. Trump and the toxic family that made him, Mary L. Trump, a trained clinical psychologist and Donald’s only niece, shines a bright light on the dark history of their family in order to explain how her uncle became the man who now threatens the world’s health, economic security, and social fabric.

Too Close For Comfort

Since he announced his run for POTUS, I have followed disaster of a term from my relatively safe Canadian home. As his antics grew, I continued to be drawn to following his every move. Frozen in disgust, yet also struck with a familiarity in his indifference to the pain of others and some of the specific things said or did would seam to jump out at me. I didn't thoroughly connect his lack of empathy and whataboutism playbook to my abusive mother. That is, until chapter two. Fred Trump was, in many ways a similar caregiver as my mother had been. Some of the lines in that chapter stopped me dead- I had thought and felt the same things towards, and from my own parent.

DJT learned to mirror his father, and by extension (to my brain) my mother.

I will admit now, what I couldn't explain to my husband back in 2017, that I did allow my disdain and distrust of my mother to cloud my judgment of the soon to be 45. Now, after listening to the family stories and the unhealthy drive set in the five siblings by a sociopath, much like one I myself had the pleasure of being born to, I can see that while it may have been unjustified, base on public knowledge back then, it was justified by my unique point of view.

Mary's narration was beautiful, her story unnerving, but has added a much needed clarity to the turmoil that is bubbling to the south.