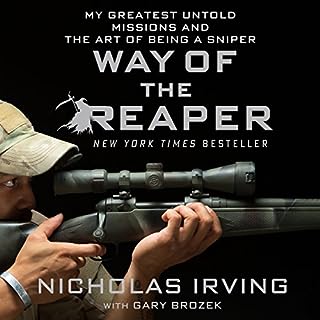 Way of the Reaper is a step-by-step accounting of how a sniper works, through the lens of Irving's 10 most significant kills - none of which have been told before. Each mission is an in-depth look at a new element of eliminating the enemy, from intel to luck, recon to weaponry. Told in a thrilling narrative, this is also a heart-pounding true story of some of the Reaper's boldest missions, including the longest shot of his military career on a human target of over half a mile.

Way of the Reaper

great book ! love to see the other side of the combat. its great to see nicholas being able to explain what has happened in is head at the time and ad the realisation that he were able to do later on. the fact that audible keep the same narrateur is awesome that way you are not weird out by hearing the book read by another voice. over all very great books you should really take a look at the tow book from M.irving.