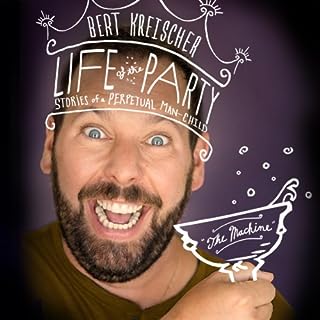 A collection of outrageous stories by the stand-up comic, TV host, and inspiration for the movie National Lampoon's Van Wilder. Bert Kreischer doesn't know how to say "no". If he did, he wouldn't have gotten himself mixed up with a group of Russian mobsters on a class trip to Moscow, earning him his nickname "The Machine". He wouldn't have wrestled with a bear or swum with sharks on national television. He wouldn't have (possibly) smoked PCP with a star of Saturday Night Live.

If you're a fan of his podcast, you will know his typical giggling and story telling style. Hearing him read his book adds a bit extra to the story, and was definitely added value over just reading it.