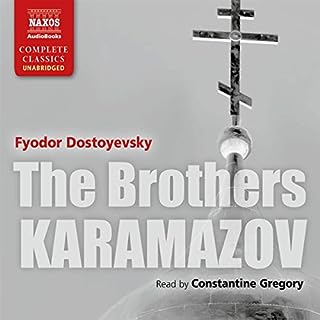 Fyodor Dostoyevsky is a titanic figure among the world's great authors, and The Brothers Karamazov is often hailed as his finest novel. A masterpiece on many levels, it transcends the boundaries of a gripping murder mystery to become a moving account of the battle between love and hate, faith and despair, compassion and cruelty, good and evil.

All components of our integral and indivisible human nature are explored and celebrated . Human beings are composed of faith ,feelings reason and flesh
All are necessary for wholeness and denying another any element of their human makeup is an awful aggression .
The narrator, Constantine Gregory made the story alive with his clear diction and his wide array of vocal roles. Listening to him perform men,women,children,drunks,the.pompous and the humbled was.a delight. 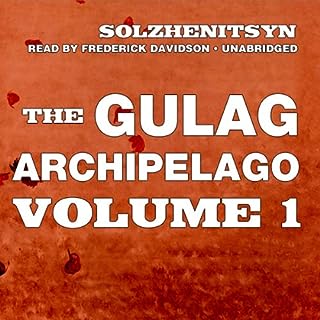 In this masterpiece, Solzhenitsyn has orchestrated thousands of incidents and individual histories into one narrative of unflagging power and momentum. Written in a tone that encompasses Olympian wrath, bitter calm, savage irony, and sheer comedy, it combines history, autobiography, documentary, and political analysis as it examines in its totality the Soviet apparatus of repression from its inception following the October Revolution of 1917.

The Devil is God's useful idiot

I learned that cruelty as only the Devil can invent breaks a body and thus frees the soul to soar into the presence of God.

My old life has been made new

This book changed the life of this septuagenarian . I didn't know I still could set goals and dream big .