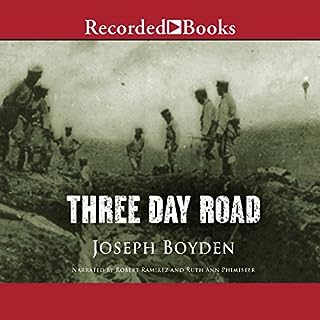 Cree Indians and best-friends Xavier and Elijah enlist in the Canadian Army in 1915, eager to become heroes. Seasoned hunters, the men become expert snipers, but their horrifying experiences serving in World War I will leave devastating impressions on each man’s life.

This is a beautiful story about a young man and his aunt preserving their way of life, becoming spiritual leaders and facing the hardships of their time. Xavier and his best friend Aliza join the Canadian Army in the Great War. As you'd expect, there are horrifying moments, but also moments of victory and joy. The characters are so likable, you'll be engaged the while book.

And the narrators give a gold performance. Both the aunt and Xavier are narrated by talented people. Amazing job. 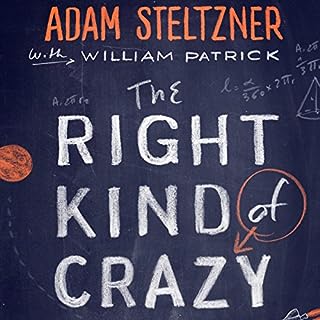 Few organizations solve as many impossible problems as NASA's Jet Propulsion Laboratory, and nobody knows more about leading rocket scientists to unlikely breakthroughs than Adam Steltzner. As the phase lead and development manager for EDL (entry, descent, and landing) of the Curiosity rover to Mars, Steltzner spearheaded the creation of one of engineering's wackiest kluges - the sky crane, which allowed the heaviest rover in the history of space exploration to land on Mars unscathed.

What does it take to land a giant rover on Mars?

It takes unassuming "curiosity" and the "right kind of crazy" to take risks.

Follow Adam Steltzner's journey from a rebelling punk to a leading aerospace engineer, who landed the largest rover ever in a treacherous crater on Mars. He explains the details of how he transformed into a formidable leader to his engineering team, and how he proposed the CRAZY design of the Sky Crane to NASA. The leading three reasons were his unrestricted curiosity to explore our universe, his humility in learning from his mistakes, and his guts in taking risks to design the ingenious Curiosity EDL system. 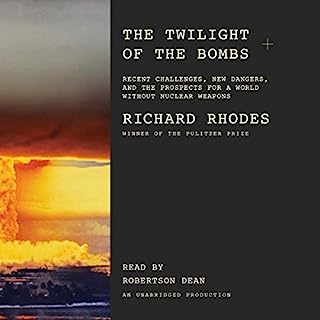 The past 20 years have transformed our relationship with nuclear weapons drastically. With extraordinary depth of knowledge and understanding, Rhodes makes clear how the five original nuclear powers—Russia, Great Britain, France, China, and especially the United States—have struggled with new realities. He shows us how the stage was set for a second tragic war when Iraq secretly destroyed it's nuclear infrastructure and reveals the real reasons George W. Bush chose to fight a second war in Iraq.

With the final installment in his 4-book series on nuclear weapons, Richard Rhodes solidifies himself as the de facto expert in nuclear history and policy.

This is my second favourite book in this series. Nothing can ever compare to The Making of The Atomic Bomb, the first in the series, which illustrates in extreme detail the science, politics, and personal accounts of the Manhattan Project. The second and third books unfold the subsequent arms race that propelled the Cold War, until the collapse of the Soviet Union.
Here, the Twilight of the Bombs concludes the series by accounting other nations' quest for nukes (Iraq, North Korea, etc), and debriefing the current treaties aimed at denuclearization.

TLDR: Although Cold War tensions have dissipated, today more countries possess nuclear weapons than ever before. The only policy that guarantees humanity's safety from nuclear Armageddon is full denuclearization. The good news is that we are on our way, thanks to the global effort of treaties and diplomacy. 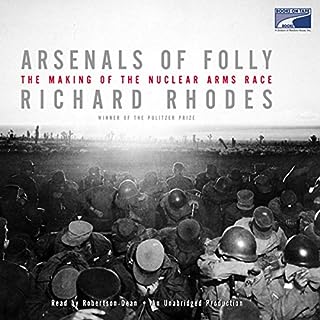 In a narrative that moves like a thriller, Rhodes sheds light on the Reagan administration's unprecedented arms buildup in the early 1980s, as well as the arms-reduction campaign that followed, and Reagan's famous 1986 summit meeting with Gorbachev. Rhodes' detailed exploration of events of this time constitutes a prehistory of the neoconservatives. The story is new, compelling, and continually surprising - a revelatory re-creation of a hugely important era of our recent history.

Richard Rhodes does it again!

Another classic by Dick Rhodes, the third installment in his four part series on nuclear weapons. I am, and forever will be, a devout fan of the first in this series, "The Making of The Atomic Bomb." "Dark Sun" captures the early nuclear arms race as the two adversaries obtain thermonuclear bombs. "Arsenals of Folly" confluently picks up on the story of the Cold War by narrating the escalation of nuclear warheads upon increasingly powerful and accurate ICBMs. As always, Rhodes does a swell job of providing not only geopolitical perspectives on every major event of the Cold War, but also highly personal stories of the world leaders, from Eisenhower and Krushchev to Bush and Gorbachev. If you want to learn about endless debates of Reagan's Star Wars, this is the book for you.

Rhodes focusses on the rise of Gorbachev, painting a clear picture of how the young, starving farm boy grew into the most revolutionary Soviet leader since Lenin (my personal hot take...but he did win a Nobel Peace Prize for ending the Cold War).

In all honesty, however, this book misses the charm that The Making of the Atomic Bomb possessed. In my opinion, TMAB remains the best history book on nuclear weapons, because of how intimately the scientists' stories are told, and how the tension of nuclear war gradually yet consistently rose throughout the entire book. Also, I'm a fan of science, so Dark Sun and Arsenals of Folly, which lack depth in science content are lower on my list of Rhodes novels. 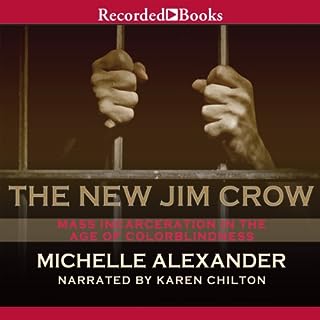 Is the War on Drugs institutionalized racism?

Yes. Racism againsts Africa Americans was was born in America and prevailed throughout its history until present day. Whenever a system of oppression was abolished, it was replaced with a new one; ie: slavery to segregation to mass incarceration. In fact, Michelle Alexander argues that the current issues with the War on Drugs, tolkenism, and colourblindness make racism as prevalent today as 50 years ago.

The book starts off with a captivating introduction that summarizes the story's key points while being easy to comprehend. The subsequent chapters elaborate on each point, covering slavery, Jim Crow, the War on Drugs, colourblindness, and tolkenism. It provides cited statistics and details from historic court cases.

This was my first book outside of my science bubble, so it was a lot for me to digest. If you take it at your own pace it covers a wide array of evidence and arguments. Great book. 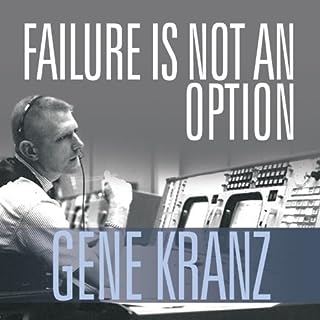 Gene Kranz was present at the creation of America's manned space program and was a key player in it for three decades. As a flight director in NASA's Mission Control, Kranz witnessed firsthand the making of history. He participated in the space program from the early days of the Mercury program to the last Apollo mission, and beyond. He endured the disastrous first years when rockets blew up and the United States seemed to fall further behind the Soviet Union in the space race.

Learn about mission control from the greatest

Gene Kranz humbly tells the story of his rise from Air Force pilot to legendary NASA Flight Director. Compared to the novel The Right Stuff which focusses on the bravado of fighter jock/astronauts, Failure Is Not An Option describes how NASA conquered the Moon through the pure grit of mission controllers. 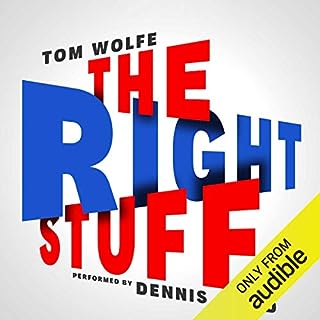 Millions of words have poured forth about man's trip to the moon, but until now few people have had a sense of the most engrossing side of the adventure; namely, what went on in the minds of the astronauts themselves - in space, on the moon, and even during certain odysseys on earth. It is this, the inner life of the astronauts, that Tom Wolfe describes with his almost uncanny empathetic powers that made The Right Stuff a classic.

Tom Wolfe tells the evolution of fighter jocks from Air Force test pilots into NASA astronauts. It provides personal insight into the lives of the Original Mercury Seven, as well as the daring tales of Chuck Yaeger's historic supersonic flights.

Fantastic narration by Dennis Quaid, accents and all. 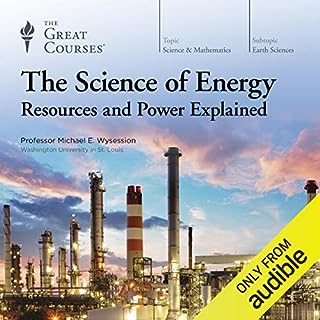 To better put into perspective the various issues surrounding energy in the 21st century, you need to understand the essential science behind how energy works. And you need a reliable source whose focus is on giving you the facts you need to form your own educated opinions.

A wide review of energy, from electricity to coal.

Covers everything about ENERGY, from physics to policies
Grade12 level
Scientific point of view
Objective>Opinionated 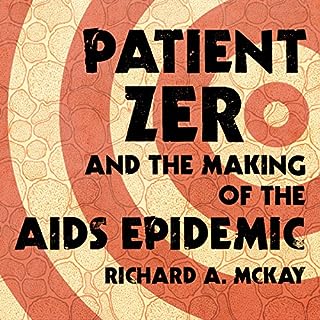 In Patient Zero, Richard A. McKay presents a carefully documented and sensitively written account of the life of Gaetan Dugas, a gay man whose skin cancer diagnosis in 1980 took on very different meanings as the HIV/AIDS epidemic developed - and who received widespread posthumous infamy when he was incorrectly identified as patient zero of the North American outbreak.

Was Dugas a modern Typhoid Mary?

An important perspective on how North America reacted to the mysterious disease that predominantly affected gay men, caused several strange symptoms, and whose cause was unknown. As people have done for all of history, fingers were pointed at a single man and his promiscuous behaviour. In this novel, McKay does a great job of explaining why and how the Patient Zero narrative was invented. In fact, which he prodigiously attempts to reverse the harm caused by the narrative, and focusses on the human side of such a tragedy. 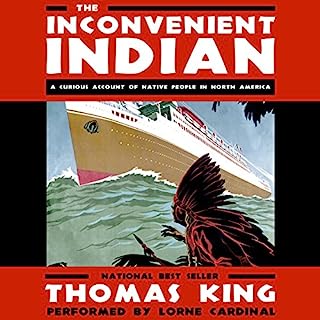 The Inconvenient Indian is at once a “history” and the complete subversion of a history - in short, a critical and personal meditation that the remarkable Thomas King has conducted over the past 50 years about what it means to be “Indian” in North America. Rich with dark and light, pain and magic, this book distills the insights gleaned from that meditation, weaving the curiously circular tale of the relationship between non-Natives and Natives in the centuries since the two first encountered each other.

I was looking for an entry to literature by and on First Nations Peoples. It was a very good choice. Compared to the many heart-wrenching novels such as the Orenda and Indian Horse, this book was an easy read, and highly informative. The narrator was witty and satirical at the best of times, and seriously critical at important beats. Thoroughly enjoyable book.

My only criticism is that it had an unclear story structure and seemed to have ended abprupty.

Overall, this book is perfect if you want an easy-to-read yet informative history of the North American people.