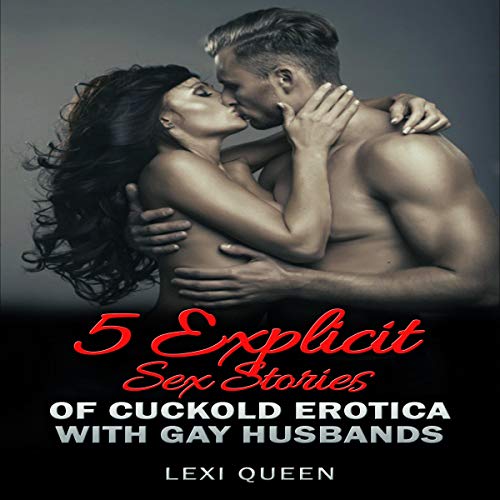 Written by: Lexi Queen
Narrated by: Eva Perkele
Try for $0.00

5 Explicit Sex Stories of Cuckold Erotica with Gay Husbands tells of promiscuous stories about dirty wives and their equally dirty husbands and boyfriends. The story “Reporter Obligations” tells of a tale where a wife has to sleep with her boss in order to progress her career and become successful - she does it with the approval of her husband. The second story “Young Wife” tells of a story of a promiscuous wife who is sleeping away from home with other men and does not love her husband. The story “New Lease” is about a promiscuous wife who has a lot of fun going to clubs and sleeping with men. Her husband finds out the truth and starts sleeping with other girls, but it turns out that it is too late to save his marriage. In the story “Small Matters”, an intelligent husband understands that he has a small dick and cannot fully satisfy his wife - hence, he gets a younger guy to fuck his wife for him. In the story “Abusive Relationship”, a girlfriend finds that her gay boyfriend is taking advantage of her, and she wants to leave, but she does not know how to tell him that she wants to sleep with other guys.

The stories also focus on promiscuous activity focused mainly on sexual satisfaction - something that women do not get from some of their older husbands.

They are simple stories, not competitive ones, I don't like ones that go exact into sex, I love the story the plot that leads up to it. So I would suggest this audiobook. I just hope it was a longer audiobook,

Realistic characters but amazingly human as you see the struggles they have gone through to keep them humble. The plot is interesting and keeps you involved in the entire novel. And seeing how she has intertwined all characters in the various novels pulls it all together. great book.

This book is so good I’m actually experimenting with men now! My mom and her friends think it’s great that I’m making friends finally. My bf said the story wasn’t “wet” enough whatever that means I’ll take his word for it

If i could i would have given 10 Starts!

It was competent to understand only to short requirements more stories. Has amazing good roll sounds pleasure to follow, I enjoyed it.

Ideal to help me get in the mood. My sex drive has decreased over the last few years, so my hubby and I recalled that if I explained stories the same this it might help. Oh, boy did it!

I also found something here that I thought I won't like but surprisingly did, and I like how the stories were written. Some are just downright naughty, while others are sweet and loving.

I highly recommend this series if you are any kind of romantic. Some of my favorite books I have read in a long time.