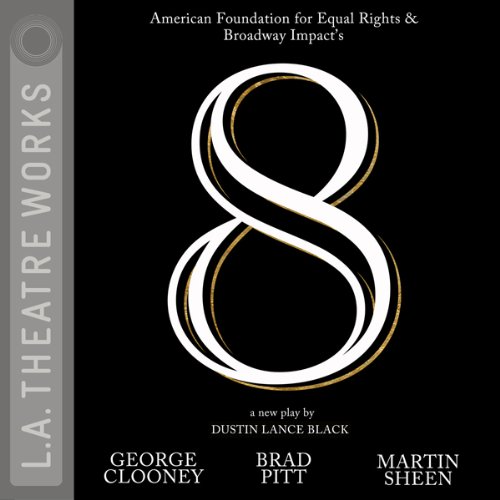 An unconstitutional proposition.
An unprecedented decision.
An all-star cast.

The play is a powerful account of the case filed by the American Foundation for Equal Rights (AFER) in the U.S. District Court in 2010 to overturn Proposition 8, a constitutional amendment that eliminated the rights of same-sex couples to marry in the state of California. Framed around the trial's historic closing arguments in June 2010, 8 provides an intimate look what unfolded when the issue of same-sex marriage was on trial.

Directed by Rob Reiner. Recorded before a live audience at the Wilshire Ebell Theater, Los Angeles, on March 3, 2012.

What listeners say about 8

Looking forward to a rework after SCOTUS arguments

In 2008, 52% of California voters approved Proposition 8 - "Only a marriage between a man and a woman is valid or recognized in California." That promptly ended a period of a few months in California when same sex couples could, and did, marry.

'8' is dramatization of the arguments heard by Judge Vaughan Walker (Brad Pitt) of the 9th Circuit Court of Appeals in a case called Hollingsworth v. Perry.

'8' has a stunning cast. Martin Sheen was especially impassioned playing former Solicitor General Theodore B. Olson. George Clooney was played the more low-key David Boies. The dramatization was a reading, not a play. The actors used scripts, their was no blocking, and the reading was in front of a live LA Theater Works audience.

Do Olson and Boies sound familiar? They are the top constitutional lawyers in the United States, and were on opposite political sides in Bush v. Gore. Both men set aside their political differences to support marriage equality. There's an interview at the end that's enlightening.

The US Supreme Court (SCOTUS, for Supreme Court of the United States) will hear arguments on Hollingsworth v. Perry, and will answer the questions "Whether the Equal Protection Clause of the Fourteenth Amendment prohibits the State of California from defining marriage as the union of a man and a woman; and (2) whether petitioners have standing under Article III, § 2 of the Constitution in this case."

These are the finest attorneys who can argue this issue before SCOTUS, and I am looking forward to Dustin Lance Black's update.

I had know idea how weak the case to overrule 8 was. Working in healthcare, I see and know how much the recognition of spouse is used. To be able to make critical health decisions about the one you love or to be able to ask about details of their condition is part of the partnership that marriage offers. I am a conservative republican and still believe I man and a woman, but if I am going to be a Christian, it is not my place to judge or ask God why these two women or two men cannot have the greatest commandment and that is of love.
If I ever have the opportunity to be able to read or act in this play, especially in NC, it would be an honor. Thank you for this gift of knowledge and wonderful production.

Would you try another book from Dustin Lance Black and/or the narrators?

No, I would not try another book. I'm currently into the Theodore Roosevelt books by Edmund Morris and recommend them highly.

Ken Follet's latest continuation of his series great and will be up next.

I dislike the presentation of the material.

If you could play editor, what scene or scenes would you have cut from 8 (Dramatized)?

I would not have listened to any of it. Dramatized to me would be the reading of the argument before the Supreme Court. Not something that sounds as if it was recorded in a High School Auditorium with the classmates and Parents going crazy when their favorite walked onto the stage.

If you're considering it, listen to a sample.

So Appropriate for today's headlines on Marriage

Since this issue is such a hot topic nationally, it seemed appropriate to listen to this play which recounts the final arguments over the validity of California's Proposition 8. This play seems much like what is going on right now in the Supreme Court deciding on whether the nation should embrace the right for LGBT community to have the same access to marriage that heterosexuals are allowed. I feel as if this play is a compelling listen to anyone whom is wanting to be informed of the struggle of gays and lesbians for equal rights. Kudos goes out to LA Theater Works and Audible for presenting this program.

8 is a perfect example of those great dialogue-driven dramas of the radio stories our grandparents enjoyed.

What other book might you compare 8 (Dramatized) to and why?

Great courtroom dramas like Inherit The Wind and Judgement At Nuremberg excel because they are based on actual trials.

I felt like a member of the jury at the first line.

This story depicts the real-life stories of those involved with the same-sex marriage issue.

Would you listen to 8 again? Why?

The characters and events are real and the star studded re-enactments made this a very powerful and enjoyable listening experience.

The same sex couples who really have gotten the s*t-end of the stick thanks to our very outdated laws and policies.

I wasn't that interested in the same sex debate. But now I get it. Equal rights, let's go.

Nothing bad to say about this read, but I found that the audiobook wasn't a great medium for it. Be wary of that and seek instead a live or visual performance, if available.

Would you consider the audio edition of 8 to be better than the print version?

What aspect of the narrators’s performance would you have changed?

Pitt, Clooney, and Sheen stand out. Each member of the cast performed their individual roles well, but as an ensemble they fell flat. Sometimes very flat.

"A Dark Moment in Human History...Hopefully Behind Us Forever"

Dustin Lance Black is a name to look for .

This is a dramatization of some of the court transcripts from the California Prop 8 case that ultimately saw the demise of Prop 8's hate and illogic in favor of legalized gay marriage in California. The win doesn't mean that we've won everywhere, however, but the actors in this are having a great time performing all the different pro and con players in the case, and the audience loves it. This has great energy, humor, and moments of deep sorrow for those who have had to wait so long to finally be allowed to marry. But it also gives the rest of us hope who don't have marriage yet.