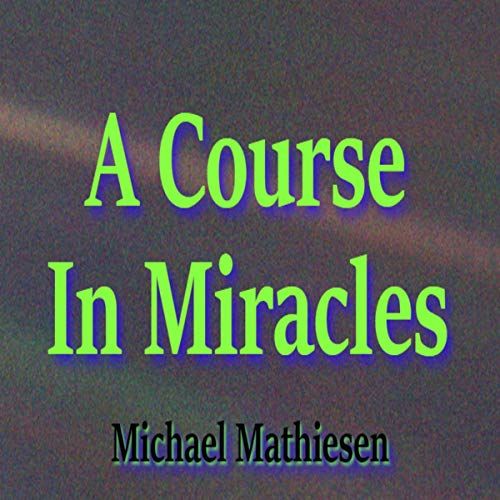 A Course in Miracles

Never before in human Evolution has there been so many souls on this planet who are in dire need of a miracle. This audiobook was designed to help every individual person find their greatest miracle as well as the society as a whole to come to a miracle that we can all use to save all life on Earth. This is not the run-of-the-mill spiritual mumbo-jumbo of miracle making. We focus on the miracles that are happening all around us, which are taken for granted today and which are all scientifically proven. The last section - "How to Get Your Miracle" will literally blow your mind because it is based on true scientific discoveries of the miracles in this universe that make you go.

This is not your typical audiobook. It's designed to be an actual course where students will learn lesson by lesson how to bring real miracles into their lives. The author is a theoretical scientist who was the first to recognize that almost everything in the universe has the property of consciousness. An earlier book - The 4 States of Consciousness - establishes the date when this theory was propounded. Today, the theory is being proven by the recent discovery that some species of Bacteria actually eat and digest their energy from electrons, not from what we would consider to be food. Electrons are their food and they even conduct the energy of electricity throughout their community as electric cables do. Also that electrons and other sub-atomic particles can become "entangled" which means they get very chummy with a partner who they actually "marry" and are never unfaithful for the rest of their lives. Also the discovery of filaments running all throughout the composition of the universe that appear to play the same role as synapses in the brain. And Black Holes appear to act like neurons in the brain. All the rest of the universe is simply thought energy where protons, neutrons, electrons can appear and disappear at will. Who's will? It should be your will. With this audiobook it will be.

What listeners say about A Course in Miracles

rating should be negative 5

This book should not even be offered as a selection on audible. I kept waiting for the narrator to stop rambling and get to the essence of what I expected as the course but after 40 minutes I realized it was not going to happen and I stopped it.

it's a miracle how long he can drone on and on.

The miracle is that he was able to pass this dribble off as a book. I think he just likes the sound of his own voice.