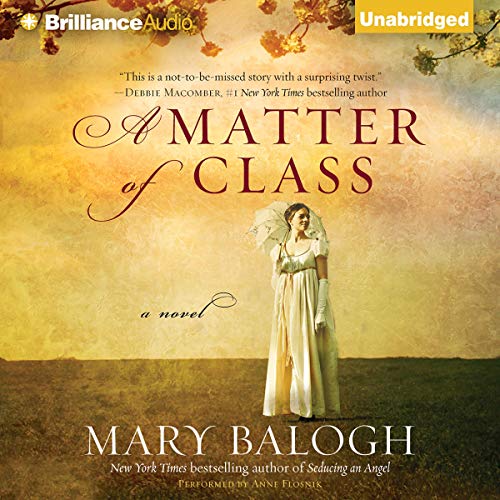 A Matter of Class

Written by: Mary Balogh
Narrated by: Anne Flosnik
Try for $0.00

Reginald Mason is wealthy, refined, and, by all accounts, a gentleman. However, he is not a gentleman by birth, a factor that pains him and his father, Bernard Mason, within the Regency society that upholds station over all else. That is, until an opportunity for social advancement arises, namely, Lady Annabelle Ashton. Daughter of the Earl of Havercroft, a neighbor and enemy of the Mason family, Annabelle finds herself disgraced by a scandal, one that has left her branded as damaged goods. Besmirched by shame, the earl is only too happy to marry Annabelle off to anyone willing to have her.

Though Bernard wishes to use Annabelle to propel his family up the social ladder, his son does not wish to marry her, preferring instead to live the wild, single life he is accustomed to. With this, Bernard serves his son an ultimatum: marry Annabelle, or make do without family funds. Having no choice, Reginald consents, and enters into a hostile engagement in which the prospective bride and groom are openly antagonistic, each one resenting the other for their current state of affairs while their respective fathers revel in their suffering.

So begins an intoxicating tale rife with dark secrets, deception, and the trials of love - a story in which very little is as it seems.

What listeners say about A Matter of Class

Wonderful romance with a twist

I am a long-time Mary Balogh fan and have been getting a little tired of her stories of late. However, this book reminded me of why she is so great. Wonderful romance with a twist. The narrator did take a little getting used to, but I quickly got passed that and would happily listen to Anne Flosnik again. Well worth the purchase price and four of my happiest hours spent this Christmas...

I’ve listened to ALL of Mary Balogh’s novels. She’s an amazing writer. But this narrator is so bad I can’t finish the book. I really tried! I’m going to get it in print and read it instead of listen to it. PLEASE Audible ... fire this narrator!!!!!!

The performance was not up to scratch

I usually love the easy flow and perfect narration of Rosalyn Landor. This whole book was spoiled by the “ not so splendid “ narrator. What a pity.

I loved the story, but the narrator’s voice was so irritating. She doesn’t do men’s voices well and her pace was so slow, like watching paint dry. I would have enjoyed it more with a different narrator.

One of my favorite Balogh books

Would you consider the audio edition of A Matter of Class to be better than the print version?

Not so much. Though the narrator wasn't awful, she definitely is not one of my favorites.

I enjoyed the characters and the twists and turns.

Oh... just didn't much care for her style.

It's one of those stories I enjoyed as much, if not more, the second time around.

Loved it! Short and sweet with unexpected turns . Loved the mail characters . I would really reccomand it :)

This is a lovely little tale. Good narration. I'm glad Balaogh did not embellish this with a lot of uncecessary details.

Without any spoilers, this is a great short listen - perfect for commuting. I enjoyed it. Hard to write a review without giving away the twist in the plot. If you like Mary Balogh’s work, you’ll most likely enjoy this.

Really enjoyed this one. Gentle, heartwarming likable main characters. I am sure I will return to this for gentle comfort read. Not my favourite narrator but I did find I got used to her (it's her male voices that grate a bit for me)

I enjoyed this story, but I felt that the accent by the performer was forced.