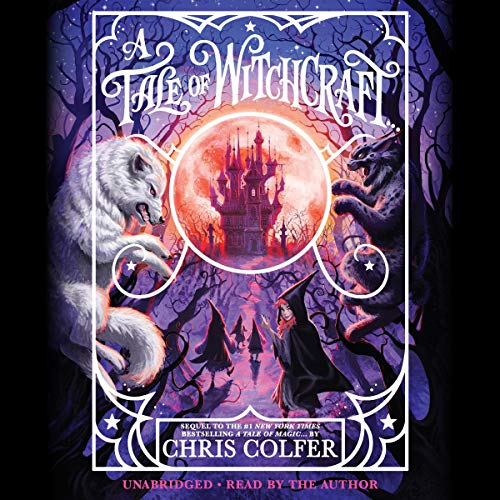 A Tale of Witchcraft...

In this enchanting story from the New York Times best-selling author of A Tale of Magic..., a group of friends grow suspicious of a potentially dangerous which - all while their once peaceful kingdom begins to crack.

When a mysterious new witch arrives at the academy, the celebrations are cut short. As the witch begins recruiting faeries into her rival school of witchcraft, it becomes clear she has dark intentions. And soon Brystal's friend Lucy becomes embroiled in an ominous plot against mankind. Elsewhere, the fragile peace is on the brink of shattering. Outrage has spread throughout the kingdoms in opposition to the legalization of magic. And, a dangerous and centuries-old clan known as the Righteous Brotherhood has resurfaced, with one goal in mind: to exterminate all magical life forever...starting with Brystal...The enchanting sequel to the New York Times best-selling A Tale of Magic... is filled with brand-new adventures and a cast of memorable characters, both familiar and new.

What listeners say about A Tale of Witchcraft...

I loved the actual book so when I heard it was on audible I was ecstatic. The story is amazing and I loved the twist at the end.

Another great book from Chris Colfer!

Chris narrates his books so well, it’s as though you are part of the world he creates. Thanks for another great listen and I look forward to the next book in the series.

Chris colfer is SERIOUSLY talented! This book is my FAVORITE book EVER!!!!! I love it! Never stop writing u are amazing Chris!

The ending left room for more, hopefully another is in the way, if you have read Land of Stories it has some similarities! Fun story, with a lot of twists.

What a sequel! If you thought the first A Tale of Magic was a wild ride, just wait until you start A Talw of Witchcraft. I have to say I was totally thrown by the twists at the end. Can't wait for the next one!

Another Round of Applause!

Chris C. has, hands down become one of the best fairy tale writers of the 20th century. This one ended up being a little darker, but thats expected when delving into witchcraft. if you have not read/listened to the 1st book in the installment, you will not enjoy it as much.
I truly enjoyed how, *POSSIBLE SPOILER ***** in the end both sides have to work together to truly make the difference they have been attempting to make.
Big Fan!

loved everything about this book...loved that Chris Colfer was the narrator of his own book! Definitely worth every penny!

The land of stories Is the best way to get the happiness out of your kids.we love the performance of the story’s. I think you should try it for now.

This book is so good. I can't wait for the next one. I love all of his books. Chris another great book. Congratulations.