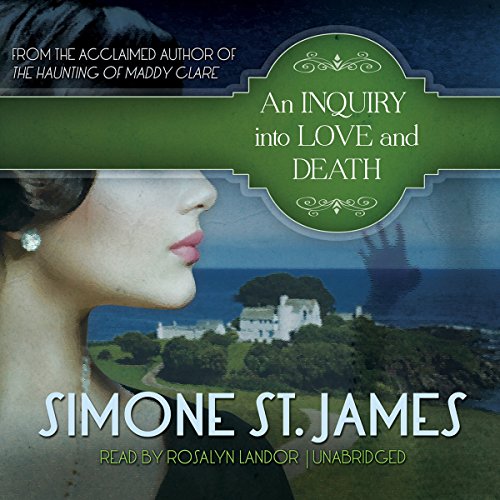 An Inquiry into Love and Death

In 1920s England, a young woman searches for the truth behind her uncle’s mysterious death in a town haunted by a restless ghost.

Oxford student Jillian Leigh works day and night to keep up with her studies - so to leave at the beginning of the term is next to impossible. But after her uncle Toby, a renowned ghost hunter, is killed in a fall off a cliff, she must drive to the seaside village of Rothewell to pack up his belongings.

Almost immediately, unsettling incidents - a book left in a cold stove, a gate swinging open on its own - escalate into terrifying events that convince Jillian an angry spirit is trying to enter the house. Is it Walking John, the 200-year-old ghost who haunts Blood Moon Bay? And who besides the ghost is roaming the local woods at night? If Toby uncovered something sinister, was his death no accident?

The arrival of handsome Scotland Yard inspector Drew Merriken, a former RAF pilot with mysteries of his own, leaves Jillian with more questions than answers - and with the added complication of a powerful, mutual attraction. Even as she suspects someone will do anything to hide the truth, she begins to discover spine-chilling secrets that lie deep within Rothewell...and at the very heart of who she is.

"I thoroughly enjoyed it!…. Simone clearly relishes and is steeped in the traditions of gothic fiction - in the best way. She conjures that secretive, hushed atmosphere perfectly, and the story kept me turning pages from beginning to end. At once an intriguing mystery and an eerie ghost story, it had more than enough spine-tingling moments to keep me gripped." (Katherine Webb, author of The Unseen)
"This is a perfectly balanced combination of mystery, romance, ghost story, and history…. Conveys the lasting psychological and practical consequences of war movingly." (RT Book Reviews Top Pick for March 2013)

This story provided a lot of chills and suspense, and I thought was very well done. I loved the narration of Rosalyn Landor, although her voices for the men could have been better.

Jillian Leigh, 22 years old and studying at Oxford, is called away to deal with the death of her uncle in a small town near Devonshire. Although reluctant, she has no choice but to take care of identifying his body and disposing of his belongings, as her parents are in Paris and unable, or unwilling, to do it.

When she arrives in the village of Rothewell, the coroner has already ruled her uncle's death an accident. He apparently fell off a cliff, but there really was no investigation into the death. As she gets to know his landlady and other town folks, she becomes more convinced that perhaps it wasn't an accident. Coincidentally, a Scotland Yard Inspector is also in town investigating, and when they meet, they work together to figure it out. There is some mild romance/sex between them, which wasn't really necessary for the story, but also wasn't overwhelming.

This story is set in post WWI England (1920's) and provides a vivid description of the countryside and town setting for that period.

Incorrect usage of terms at times was not enough to disrupt, and didn't bother me at all. I would recommend this one for a cold winter night, snuggled in bed with the lights on.

Stereotypical, but don't dismiss this as just another mystery/romance - those clichés happen to be the right ingredients for an eerie and entertaining read that is what it claims to be - a ghost story. James doesn't tease the listener with banging shutters and rattling chains, she delivers, but not all the ghosts are spectral. The ghost of Walking John isn't the only demon haunting the townsfolk of Rothewell since the end of WWI. There was some unevenness in the story, some obvious mispronunciations and confusing characterizations by the narrator, but I didn't feel compelled to pull out my red pencil. Not my usual genre, but I enjoyed this; it is immediately engaging with a lively pace that kept me at it clue by clue, right to the spooky conclusion and, well, I can't give up all the secrets.

The perfect gothic horror novel. I really enjoyed it and didn't dislike the narrator as several others did. I will download more by this author for sure.

I love this author.

I will be watching this author for more works. I hope audible is watching, too.

Simone St. James has written another chilling novel that I loved! Jillian Leigh is notified that her uncle Toby has died and because her parents are away in Paris, she must see to his affairs. She travels alone from Oxford (where she is a student) to Rothewell on the coast. Toby had been renting a home in Rothewell as he pursued his ghost hunting.
Jillian soon becomes embroiled in a mystery within the town and a haunting in the house and the woods. The whole setting is very tense and a little spooky. She meets Drew an Inspector with Scotland Yard and there is a romantic spark between them from the beginning.
In the mix of the story is the aftermath of the Great War on the townsfolk of Rothewell. No one in the town was left unscathed from the war and there are many secrets.
This was another excellent audio production through audible.com. The narrator did a fantastic job with the voices of all the different characters. Simone St. James created an excellent story!

It was a little long for such a light-weight story, so some editing to tighten up the plot would have been a good thing.

What was most disappointing about Simone St. James’s story?

The characters weren't original, and the mix of ghost story and post WWI combat stress was strained. The writing was atmospheric, but not particularly suspenseful.

Great job of voicing the different characters. The narration was excellent !

Could you see An Inquiry into Love and Death being made into a movie or a TV series? Who should the stars be?

Yes, this would make a good movie. The characters are so poorly defined in the book that just about any age-appropriate actors could play them.

This is tied for my favorite St. James book.

If you can't decide whether or not to get it, get it. You won't regret it unless you hate really good, fun ghost stories with really interesting protagonists. Read all of Simone's books ASAP.

Loved this book and the narration

This was a fantastic book, great story and narration. Definitely worth it. I'm looking forward to future books by Simone St. James.

My favorite of SSJ books so far. She has great characters and great stories for them to live within.

like her other books, I really enjoyed this one. The narrator took some getting used to. At first I felt the voice was all wrong and there didn't seem to be enough distinction to voices. But then at some point an hour in or so I realized the narrator had found her groove or something and I was having no problems at all with it. I liked this story and the second half of it was especially awesome!