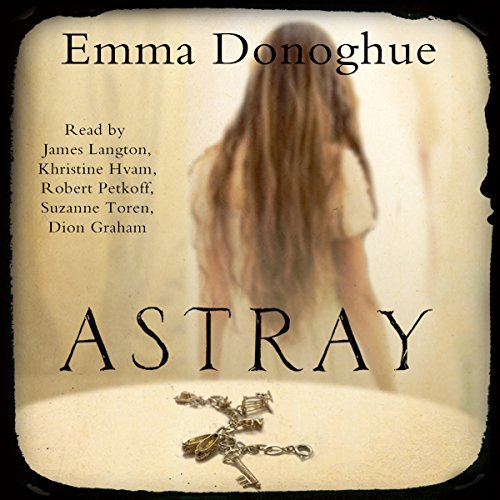 They cross other borders, too: those of race, law, sex, and sanity. They travel for love or money, incognito or under duress. Donoghue describes the brutal plot hatched by a slave in conjunction with his master's wife to set them both free; she draws out the difficulties of gold mining in the Yukon, even in the supposedly plentiful early days, and she takes us to an early Puritan community in Massachusetts unsettled by an invented sex scandal.

Astray also includes "The Hunt'" a shocking confession of one soldier's violent betrayal during the American Revolution, which has been shortlisted for the 2012 Sunday Times Short Story Award. Astray is a sequence of 14 stories by the prize-winning author of Room and The Sealed Letter.

These strange, true tales light up four centuries of wanderings, offering a past made up of deviations and a surprising and moving history for restless times.

What listeners say about Astray

I really enjoyed these stories, connected loosely by the theme of life changes and all based on actual historical references. Some of these stories are heartbreaking, but all are interesting and insightful character stories, especially given the brevity of the "short story" format. Highly recommended.

Absolutely loved each story and want MORE! I can't wait to read more by this wonderful author.

My favorite part was at the end of each short story you get a bonus description of each story . My second favorite was the words from the author at the end.

Those stories and narrators!! I really enjoyed listening to this book and liked the way Donoghue found pieces from historical records and wove tales around her theme "astray." I think these are among, if not the, best short stories I have ever come across.