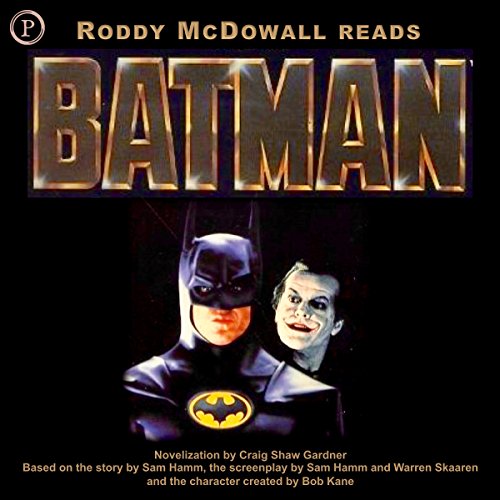 They don't know who he really is. They never know where he'll show up. But the citizens of Gotham City know they have a protector. He's the Caped Crusader with an arsenal of amazing weaponry and a repertoire of incredible acrobatics. He's the legend they call Batman.

In the toxic brew of big-city corruption, a bone-white, green-haired, eternally grinning thing is born. His name is The Joker. His lust is for all the wealth, power, and revenge he can grab from the world. And in the timeless, violent war between criminal and crimefighter, Batman vs. The Joker will be the ultimate duel.

What listeners say about Batman

NOT Unabridged! Don't recommend buying at all!

When I bought this, I'd already purchased the novelization of 1989's Batman years ago, and read through it. Being familiar with Roddy McDowell and his contributions to Batman media, I thought I'd give this audiobook a try, since I did like the novelization, hence my rating for performance and story.

HOWEVER, after only listening to about 12 minutes of it today, I can tell you that this thing is NOT what's advertised. This is supposed to be an unabridged audiobook of the novelization written by Craig Shaw Gardner. It is not. It is very, VERY abridged. It opens with the first page of the book's prologue, which ends in "Welcome to Gotham City".

After that, an unabridged audiobook, a full reading of the novelization's text, should continue on with "It was the city at night, full of lost souls and street trash...", the same sentence that starts page 2. That's what should have happened. But it doesn't. The recording skips over the family that gets robbed in the opening, the entire conversation of the burglars after, and goes straight from "Welcome to Gotham City" to "High up on a roof, two crooks are bent over a stolen wallet," the latter of which is not in the book anywhere and was written to replace pages of dialogue from the thieves.

The sentence after that one is from the book, but then it cuts out even MORE text, taking paragraph after paragraph of action to quickly end what is meant to be the prologue at 2:10. The first scene of chapter 1, which is about four pages long, give or take, is completed in one minute and thirty-seven seconds.

The last scene of chapter 1, where Knox meets Lt. Eckhardt, is completely missing, as is the first scene of chapter 2 where Jack Napier talks to Eckhardt. And the scene after that. In fact, the recording jumps from page 17 of the book to page 25, beginning the scene by cutting out the opening sentence and replacing it with an original one before continuing to abridge the scene.

I haven't gotten very far in the audiobook, but as I've pointed out, every scene so far has been gutted of paragraph after paragraph providing characterization, action, and detail, or sometimes completely removed. This is an ABRIDGED recording. I can't fault the story or the performance, but this product is NOT what's advertised, and is far inferior to the book it's supposed to be based on.

The performance done on this was different than in the movie, but that is one thing that made listening to it so fun. It didn't have all the scenes from the movie but it was still fun. And with Roddy narrating it was almost like The Mad Hatter from the animated series was there too.

This audiobook is too abridged. It skips around randomly and does not add anything to the movie.

Audiobook is shorter than movie it's based on!

Too abridged. Too condensed. A waste of Mr. McDowell's talent. Remake this with the WHOLE BOOK!

First off the story os highly edited. several parts are omitted . McDowall does a great job reading as the Joker but a terrible job reading as Batman. As Batman he talks too much and too high pitched but he gets the joker right.

I struggled so hard to listen to this narrator. The pacing was so weird and kept drawing me out of the story. see the movie instead.

was good. fun listen. like the movie. tim burton edition. really cool. suggested highly. so do it.

The book did not have nearly as much info as the movie did. The book kept jumping everywhere no details like the movie had