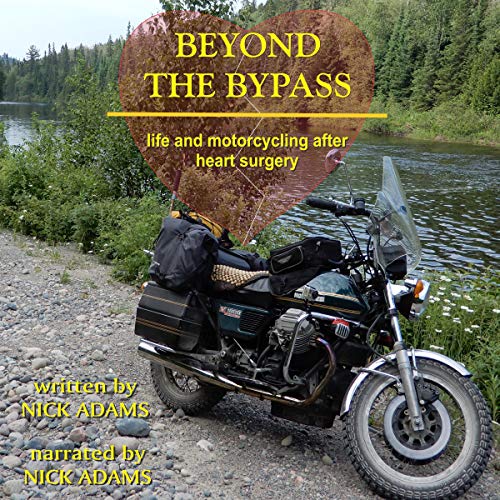 When you’re standing on the edge of the abyss, health failing, the idea of being sliced open down the middle for heart surgery may not seem terribly appealing, but most people agree that it’s probably preferable to the alternative.

Despite a lifetime of healthy outdoor activity and a diet no worse (or better, for that matter) than the next man’s, in 2017, at the age of 66, Nick found himself under the knife for triple bypass surgery. Would this be the end to hiking adventures and long motorcycle trips to remote parts? Not a chance!

Recovery from open heart surgery is a long, slow process. But with plenty of help, some dedication, lots of careful walking, and heaps of good luck, it is possible to return to a fully active life.

Although the first part of this book describes Nick’s experiences with CABG (coronary artery bypass graft) and his eventual return to doing those things he loves, it is also a motorcycle and hiking travel book. The later chapters describe some of his explorations in Canada and the UK and adventures in motorcycling since his recovery.

If you are having, or have just had CABG, hold on to the belief that there is light at the end of the tunnel. And when you are able to return to the activities you enjoy, they will seem more worthwhile and precious than before.

What listeners say about Beyond the Bypass

Nick does not disappoint.

I cannot say enough about these audio versions. I have been doing a lot of walking lately, one ear listening for cars and one earbud listening to Nick. This is motorcycle chicken soup material. Every one who rides on two wheels will enjoy this material. Everything he does is something I can afford to do, it was all very relatable. Highly recommended.