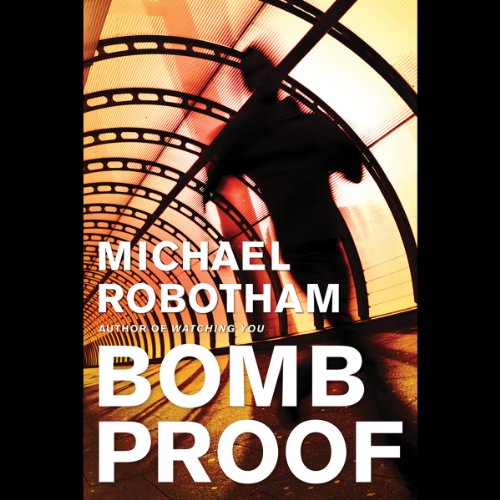 Written by: Michael Robotham
Narrated by: Sean Barrett
Try for $0.00

Sami Macbeth is not a master criminal. He's not even a minor one. He's not a jewel thief. He's not a safe-cracker. He's not an expert in explosives.

Sami plays guitar and wants to be a rock god but keeps getting side-tracked by unforeseen circumstances. Fifty-four hours ago Sami was released from prison. Thirty-six hours ago he slept with the woman of his dreams at the Savoy. An hour ago his train blew up.

Now he's carrying a rucksack through London's West End and has turned himself into the most wanted terrorist in the country. Fast, funny, hip and violent, Bombproof is a nonstop adventure full of unforgettable characters and a heartwarming hero - Sami Macbeth - a man with the uncanny ability to turn a desperate situation into a hopeless one.

What listeners say about Bombproof

Like all of his other books Bombproof is another Michael Robotham winner! Well written, suspenseful, engaging and exciting! I listened to it in 2 days and really didn't want to turn it off. MR does such a good job developing characters, setting up plots and engaging the interest of the reader it's hard not to get drawn in to his books and he's quickly become one of my favorite writers. Can't wait for the next book!

I wasn't crazy about the start, with a guy who appears to be getting away from a bombing for which he is responsible. But then Michael Robotham makes the guy likeable, smart, and simply unlucky. And enter the beloved retired detective. Can he make things right? I love the characters, the plot, and, of course, the narrator. Great story that keeps you guessing up until the end.

Abobsolutely Stunning! I Was Up All Night!

I took a chance, reading a few Amazon reviews. This is absolutely one of the best suspense novels I've ever read. Read the summary for the story.

What it doesn't tell you is how engrossing te story is, how wonderful the characters are developed. It was like watching a blockbuster movie for the first time.

This will be a huge best seller on Audible for good reason.

Very good, with lots of action

After reading Charles' review I immediately bought this book, and I wasn't disappointed. It hooked me from the beginning and held my attention for the duration. I liked the fact the main character wasn't a macho guy no one could kill (my beef with so many action thrillers). It still had it's moments where I thought, there's no way that could happen, but very entertaining nonetheless.

I would recommend this book to anyone looking for a fun story to entertain them for many hours.

Sean Barrett did his job perfectly; he made the story come alive, and didn't get in the way of it.

What disappointed you about Bombproof?

Maybe it's just that this particular story didn't work for me, but I couldn't get into this. I didn't find the action suspenseful and I didn't relate to any character.

I'm sorry such terrible things happened to Sami, but eventually they just go so ridiculously bad I didn't care anymore and wanted the book to be over. Sami was hapless, Ruiz was not given enough room to be a fully developed character I cared about, and everyone else was either useless or terrible or both.

If one guy is going to be so unlucky, at least let's keep a sense of humor about the whole thing. This story just felt wooden, humorless, unbelievable, and ultimately forgettable.

In addition, well, look: I read a LOT of suspense/mystery/thrillers and I'm used to everything being male-centric. I expect it. But this one seemed overwhelmingly masculine. Not only did this not pass the Bechdel test (not by a long shot), but women were almost always described in objectifying/judgmental ways. And of the two main-ish female characters, one was a weak, sad spirit who needed saving, the other an emotional wreck who was an object of lust and little else.

What does Sean Barrett bring to the story that you wouldn’t experience if you just read the book?

I appreciated that this was a British author and story, so the accent helped enforce the spirit of the book. But I also think listening (rather than reading) made the story even slower-going for me. This should have been a fast-paced thriller and instead just plodded along. The narrator made it worse (no fault of his own).

I don't want to give anything away, and maybe some of my reaction has to do with the fact that the book didn't become another gruesome depiction of the evils of terrorism, but I have to say that I can't recall the last time I've enjoyed a book so much. I think a lot has to do with the humor and word craft, but the plot was really interesting to follow, the cliffhangers don't leave us hanging for three chapters, the action was conceivable, and the ending was satisfying. A number of really horrible things do happen, most of which involved the victimization of the protagonist's sister (really ugly stuff), but on the other hand I think something in every chapter made me laugh, and I appreciate that. This is going right onto my list of audio books that I'll listen to more than once.

Too slow of a pace for me.

Once again, I purchased this after reading the glowing reviews others have left for it. I have tried repeatedly, but just can't seem to get into the rhythm of this story. We use audiobooks on long drives that we make twice a week, and our books need to keep us awake behind the wheel, not lull us to sleep. Sean Barrett's voice is pleasant, calm and soothing. That combination, mixed with the slow pace of the developing story, is a swing and a miss for me, turning this audiobook into a sleeping potion.

What does Sean Barrett bring to the story that you wouldn’t experience if you just read the book?

You only think you know!

Once you get engaged you'll be hooked until the very last.

One of Robotham's best. Loved it!!!

I liked this author. Listened to Wrecked first and liked that enough to want more. I thought definitely worth the listen.