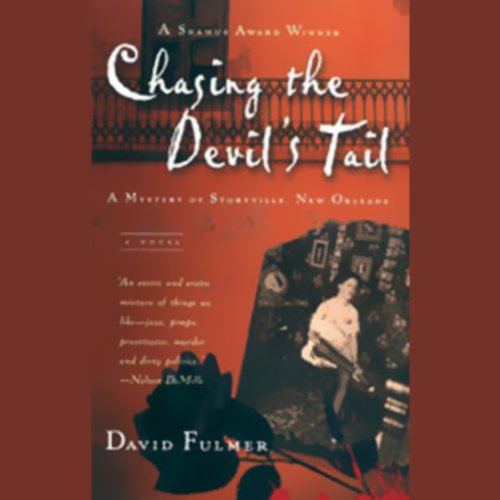 In the raucous, bloody, red-light district of Storyville, New Orleans, in 1907, where 2,000 scarlet women ply their trade, where cocaine and opium are sold over the counter, and where rye whiskey flows like an amber river, there's a killer loose. Someone is murdering Storyville prostitutes and marking each killing with a black rose.

As Creole detective Valentin St. Cyr begins to investigate, he encounters a cast of characters drawn from history: Tom Anderson, the political boss who runs Storyville like a private kingdom; Lulu White, the district's most notorious madam; a young piano player who would come to be known as Jelly Roll Morton; and Buddy Bolden, the man who all but invented jazz. No ordinary mystery, Chasing the Devil's Tail is a chilling portrait of musical genius and self-destruction, set at the moment when jazz was born.

"Brimming with backstories and historical tidbits." ( Kirkus Reviews)
"A fine beginning to what looks like a first-rate historical series." ( Booklist)
"[Fulmer's] first fiction, which features a fascinating plot line and pervasive New Orleans atmosphere, is an outstanding historical." ( Library Journal)

What listeners say about Chasing the Devil's Tail

What did you love best about Chasing the Devil's Tail?

As a fan of New Orleans, I'm always critical of material that takes place in NoLa. NCIS New Orleans, for instance, over does the internal references (e.g., eating gumbo, places, etc.). Fulmer's book, though, is tempered with references only when necessary - locations, food, people, and even the weather. And in places, they almost feel like characters in the book.

Speaking of the book, this is an intriguing murder mystery that had me guessing up to the end. I guessed part of it but was thrown for a loop on other parts. I listened to it in one long drive and couldn't wait to get back in the car to turn it on again. The narrator was expressive and took on each character with their own voice; he didn't over act each character and kept the story going. The only criticism is in the actual production itself. Make sure to turn down the treble and bass, otherwise it gets tingy in places.

Overall, this is an excellent work and I'm going to get the second one from Fulmer. Loved it.

Where does Chasing the Devil's Tail rank among all the audiobooks you’ve listened to so far?

The narrator brings historical fiction to life in an enchanting way.

What was one of the most memorable moments of Chasing the Devil's Tail?

It was a series really; King Bolden's descent into mental illness.

He has a rich, beautiful voice.

This is a well performed book - the narrator was convincing and was able to portray all the character differently so they were readily identifiable.

The details about historical New Orleans were very interesting and the book was well written, but there was just something about it that I couldn’t warm to.

Rather than taking every opportunity to listen to this book, and devouring it as quickly as possible, listening to it felt like duty - I had to finish it because I bought it.

Thank goodness for the ability to exchange books! After persevering for several chapters, I finally gave up, and was able to exchange it.

I’m sure this book will appeal to many other readers, it is well written and performed- it just did not have that undefinable spark that appealed to me

Chilling...I really liked the book and the narration was perfect as usual when Dion is reading.

As a native of New Orleans, I have always been entranced by the legends and history of the city. This is a wonderful story. The author captures the gritty feel of the area, and the narrator's voice and talent accentuate it nicely. If I could give 10 stars, I would!

fun story made even better by the story teller.

Great story. Excellent delivery. After listening to this, I bought the next two St. Cyr books. Just wish they'd been Audible books.

Slow start but it got very interesting. The crime mysteries of New Orleans and it’s history

This was such a good story! I felt like I was right there in the club with the musicians and walking down the street with the detective! Thank you so much! Reader was great too! Accents and inflections made it sound so real!

So, I really was interested when I read the description of this book. It was set in New Orleans and had the promise of a good mystery. There was a good twist at the end of the book. But there were parts of the story that just lagged. There were parts of the book where the detective seemed unmotivated to find the killer and just waited around for another murder to happen. I really wanted this book to be better.