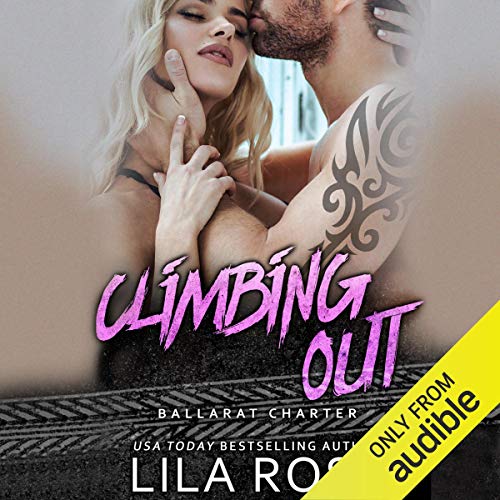 Deanna Drake has a past she longs to forget, but won't ever be able to. She's always been the tough one. No one but her best friend Zara has ever been able to penetrate her cold, hard shell.

Griz - a.k.a. Grady Daniels, Hawks Motorcycle Club's second-in-command, who also has a past that he wishes he could undo...all except one part.

It's her past that brings them together. Only will it be forever?

What listeners say about Climbing Out

this series is really good and I love all the books I just wish we had better narrator's. the woman narrator is really slow in her speaking and she pauses when she really shouldn't. i had to move my speed up high to get into the story with the voice's. wish they could redo all these books with better voices. the males voice needs to be deeper stronger for biker dudes. but really love the story.

Wonderful MC romance evening read. The storyline was enjoyable with great characters and some hot sex scenes mixed in. The narrators did a fine job, I adore the accents.

He's too old, or so he thinks. She is full of sass, a mouth fitting her nickname. He's the club VP and best friends with the prez. She's bestie with the Prez's woman. Both women have their problems. The guys are hot, 1% MC and possessive of their women.

I love this series and still have two audios to listen to and can't wait. The brothers are loyal and get such a kick out of the woman and their relationship with the two club leaders. The brothers would also do anything for them, they are part of the Hawk MC family. There is enough steam to power Australia. Plenty of action and lots of heart. Touching with some great kids and storyline. Great Story and the narration was so good love an Aussie accent.

Absolutely amazing! What's not to love about Griz and Deanna? This book is full of angst, hilarious banter, witty remarks and some scorching sexy times. I loved evert moment of it.
Narration was Great!

I really enjoyed this story, just as I did the first one. great narration. it may be an m.c. book, and have kidnapping and killing and all that stuff, but I found that there was even a bit of a sweet side amongst that in this book.

Kept my attention throughout.

Seriously enjoyed the story. The characters stayed true to their personalities throughout. Sometimes a strong female character will change into a weak whiny one halfway through. Not this time; Thank you for keeping your's strong and colorful.

One mouthy women and one Grizzly Biker don't always mix. lookout when they do. Dont be quick to judge a book by its cover their just might be a Diamond in the Rough

but that innocent people just amazing bikers crazy. but the chin lift drove me crazy as well as thr cut called vest . cars are cages at least biker world .

I loved it when I read it, even more when I listened. so good, so hot

This book was a good read. It had action, fights, knife play and love. Bikers and their families are the main stars.