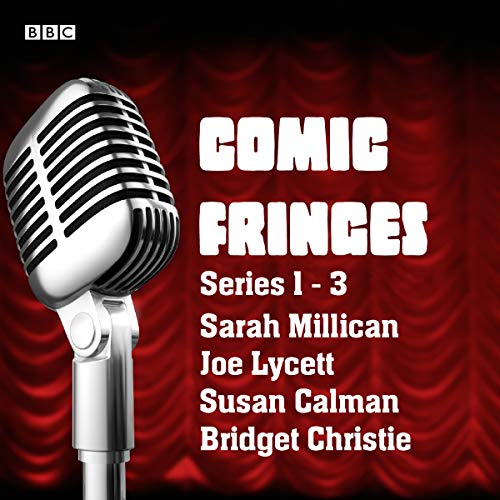 Nine short stories written and read by comedians, recorded live in front of an audience at the Edinburgh Festival Fringe.

'May Contain Nuts' by Janey Godley: a woman glimpses her own mortality when she calculates that only 27 years separate her from her cantankerous father.

'The Hair of the Dead' by Sarah Millican: a moving (and very funny) short story about a compassionate undertaker's assistant.

'Gone Phishing' by Jon Richardson: a tale of love and betrayal set in a remote village in the Yorkshire Dales.

'The Woman Who Sniffed' by Susan Calman: a wry look at office politics, told with Calman’s characteristic humour and upbeat energy.

'Just When You Thought It Was Safe to Be Green' by Patrick Monahan: a tale that warns against paying too much attention to government crime statistics.

'On the Dot' by Shazia Mirza: a story featuring a certain Mrs Pims, who is always mysteriously late for everything. Then one day, the reason for her tardiness becomes apparent....

'Stairlift Us Up Where We Belong' by Sarah Millican: a poignant and funny monologue exploring the tricky turning point in a woman's life, when she goes from being thought of as useful to becoming invisible.

'Spooky and the Van' by Joe Lycett: 17-year-old Julian is writing a blog. He's currently experiencing the weird limbo that lies between finishing school and starting university. As well as musing upon how his life might change, Julian's neighbor, nicknamed Spooky, is providing plenty of writing material and mystery....

'A Difference of Opinion' by Bridget Christie: When Bridget's husband is assaulted by the ghost of a long dead European leader, it highlights the vast differences in interpretation between a believer and an atheist.