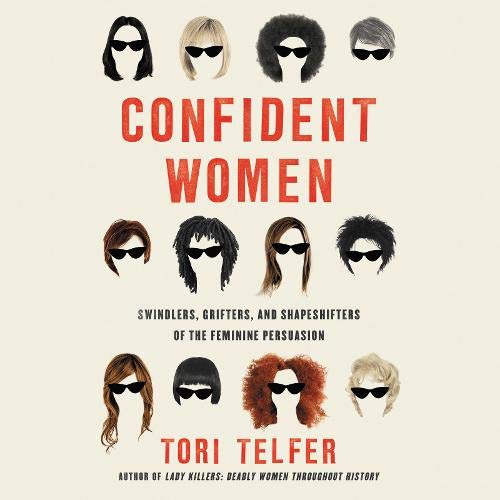 Written by: Tori Telfer
Narrated by: Jaime Lamchick
Try for $0.00

A thoroughly entertaining and darkly humorous roundup of history’s notorious but often forgotten female con artists and their bold, outrageous scams - by the acclaimed author of Lady Killers.

From Elizabeth Holmes and Anna Delvey to Frank Abagnale and Charles Ponzi, audacious scams and charismatic scammers continue to intrigue us as a culture. As Tori Telfer reveals in Confident Women, the art of the con has a long and venerable tradition, and its female practitioners are some of the best - or worst.

In the 1700s in Paris, Jeanne de Saint-Rémy scammed the royal jewelers out of a necklace made from 647 diamonds by pretending she was best friends with Queen Marie Antoinette.

In the mid-1800s, sisters Kate and Maggie Fox began pretending they could speak to spirits and accidentally started a religious movement that was soon crawling with female con artists. A gal calling herself Loreta Janeta Velasquez claimed to be a soldier and convinced people she worked for the Confederacy - or the Union, depending on who she was talking to. Meanwhile, Cassie Chadwick was forging paperwork and getting banks to loan her upward of $40,000 by telling people she was Andrew Carnegie’s illegitimate daughter.

In the 1900s, a 40-something woman named Margaret Lydia Burton embezzled money all over the country and stole upward of 40 prized show dogs, while a few decades later, a teenager named Roxie Ann Rice scammed the entire NFL. And since the death of the Romanovs, women claiming to be Anastasia have been selling their stories to magazines. What about today? Spoiler alert: These “artists” are still conning.

Confident Women asks the provocative question: Where does chutzpah intersect with a uniquely female pathology - and how were these notorious women able to so spectacularly dupe and swindle their victims?

What listeners say about Confident Women

I chose to enjoy this one on audio, and it was the exact kind of interesting storytelling to keep me coming back on every free moment I had!

I love a good grifter story, I find them SO fascinating, and this book based completely on the female grifters through the generations is just the exact kind of absorbing content that I can't get enough of.

This is perfect for summer - light and easy and perfect for when you need something to pick up at random.

I was hooked after the first sentence. After reading Lady Killers from Tori Telfer, I knew I just had to check this book out too and I was not disappointed! LOVE LOVE LOVED IT

This is light and fun, but that is not to minimize the crimes, actions or deceptions perpetrated by these women. It is not a heavy read and the stories ride along in a way that makes it an easy listen. Worthwhile for those who are interested in how grifters grift. If you are looking for real life crime, it may not be for you, but if you are looking for a longer podcast with a cast of characters, it is a fun listen. Jaime Lamchick does a great job and makes it clear that she enjoyed reading it.

I’m a fan of the author’s podcast Criminal Broads. I loved her book Killer Women. I like how she organizes the story and doesn’t talk or write in circles. These women are crazy. What’s crazy is how long they get away with it too. Especially the current cases. I loved she had the story about all the women trying to claim to be Anastasia in there. A variety of fascinating stories!

The narration on this is awesome- there are so many books that would be so much more if they had the effort in narration that this book does. A great read and a wonderful listen.

Jaime Lamchik obviously had a great time reading this book, I could hear the laughter in her voice at some of the antics of the con women. Teller did her research and it showed.
The only thing I was missing was more of a conclusion. what makes us love them? What is so interesting about crime, especially white collar crime? I would have liked to see some broader analysis of these trends. But other than that, a pleasant read.

A genuinely fun and interesting listen!

I can't remember the last time I have had "fun" listening to a book. Confident Women was a thoroughly enjoyable listen -- it also somehow managed to be entertainingly snarky and tongue in cheek without insulting any of the people involved in the stories. I absolutely love this audio book. :)

Phenomenal stories about women, for women

For every good girl who wants to be bad. For every bad girl who can relate to a mischievous life.