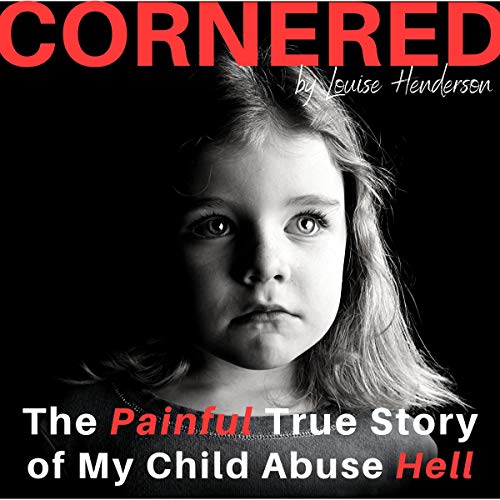 Cornered: The Painful True Story of My Child Abuse Hell

Written by: Louise Henderson
Narrated by: Cait Frizzell
Try for $0.00

Born in 1975, Louise was living a happy, normal life as the much-adored only child of two loving and hard-working parents. But then, the tragic deaths of her father and grandfather within two years of each other turn her life upside-down.

Having moved in with her mother's parents after the death of her father, Louise finds that her grandmother's increasing reliance on the local church for comfort after her husband's death draws a soon-to-be unwelcome guest to the family home: the verger, Mr. Jarvis. Whilst outwardly paying attention to her widowed grandmother, he also seems to be focused on Louise herself and abuses his position of trust, both at the church's Sunday school and in the family home, to force his unnatural obsessions on her.

Even after Louise's mother remarries and she can finally look forward to moving away from Mr. Jarvis, Louise must endure one more harrowing attack before he is finally caught out. But even then, with child protection teams still very much in their infancy in the early 1980s, Louise still lives with the consequences of her unstable childhood.

Warning: This audiobook is based upon a true story of child abuse, and as such contains passages that some listeners may find disturbing.

What listeners say about Cornered: The Painful True Story of My Child Abuse Hell

I enjoyed this book as it touched home with me and my abuser! Powerful ending!
I did not like his creepy voice and would skip through those parts.
Thanks for sharing your story, unfortunately victims are left with a life sentence to overcome childhood trauma . I can’t believe the grandmother not being tuned in. Perhaps people will pay more attention to children’s pleas! I’m sure you have helped even 1 child going through this. I felt angry towards mom and grandma. You tried to tell them. I told no one until adulthood, my mother refuses to talk about it. He was a priest, a man as close as possible to god,
a man with lots of power!

Interesting all the way through

Not too long. Kept me engaged the whole time. The narrator was great. Just a grand example of what really goes on within the church and behind closed doors.

Thank you for writing this book.

This story was in many ways very validating for me personally. I have never told anyone about my own personal abuse, and I have had off and on times where the abuse creeps in and inserts itself in my perfectly happy and respectful marriage. It helps to know that I am not alone.

Not your usual child abuse story.

Definitely not the run of the mill situation. The perpetrator was a very sick man. He exploited the innocent mind of the child. So often, these children accept wild stories as gospel, when they come from an adult.
I enjoyed the ending.

A very worthwhile listen.
Excellent narrator.
I deducted a star because it was a shorter and less complicated story than many.

This is a brief recounting of one child’s experiences with sexual abuse. Some scenes are graphic so listeners discretion is advised. Also keep in mind the story is VERY short

from weak to strong

it opened my eyes more to child abuse. no child should have to live in fear

It gave a great perspective on why children do not disclose sexual abuse. In addition to how patient and determined a pedophile will wait.

This story was well told, and kept me listening all the way through. The narrator did a good job telling this story. No child should have to endure abuse, of any kind!

This is a very hard descriptive read about true story of child abuse. Not for the faint of heart. Thank you fir sharing your story and prayers for you for peace in all the years ahead.

very graphic too hard to listen to

I could not finish this book. the details are so horrible 😭 The narrator is great but it is too graphic.