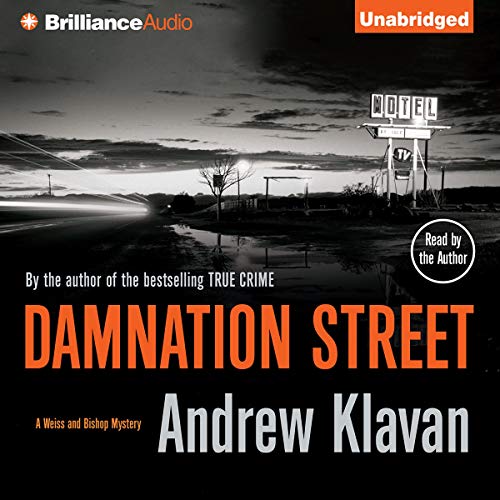 Scott Weiss is a private detective. John Foy is a professional killer. The woman is Julie Wyant, a hooker with the face of an angel.

Julie spent one night with Foy - a night of psychopathic cruelty that Foy called love. Desperate to get away from him, she vanished without a trace. And Foy wants her back.

There's only one man who can find her: Weiss, the best locate operative in the business. She's begged him not to look for her, fearing he'll bring the killer in his wake. But Weiss can't stay away.

Now, from a town called Paradise, through a wilderness that feels like hell, Weiss searches for Julie - and the killer follows, waiting for his chance.

They are two expert hunters matching move for move - until it ends in gunfire on Damnation Street.

What listeners say about Damnation Street

I really enjoyed all three of the books in this series. I think the author is a very good narrator.

I couldn't stop listening to this book. Andrew
Klavan is maybe the best story teller that I have
ever heard or read. You will want to listen to the
books in order: Dynamite Road then Shotgun Alley
then Damnation Street.

Jim Bishop is the man

The books have more edge and are more thought provoking than Jack Reacher. I have to say the Reacher books have more of a page-turning quality, but these Klavan books resonate.

#5 in a row for me;still yawn free

I really enjoy a story with lots of twists and turns. It was comical and suspenseful. The narrator certainly amplified the whole experience. I had fun listening to this book.